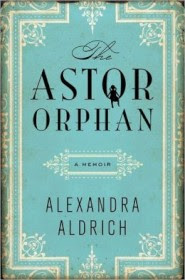 A couple of summers ago, I read three memoirs, in a row, by and about somewhat dysfunctional people, and each one was worse than the last. :)  So I was pleasantly surprised to find myself liking  this book, about some present-day members of the current generation of the Astor family and their  odd, impoverished, bohemian life at Rokeby, a decaying mansion on the Hudson River.  {There's an interesting New York Times article about the house, and the people it inherited, here. When you read the article, you're reminded that this is a memoir, with names changed, and characters compressed.}

It's a little hard to follow, from passages here and there about her ancestors, but the author is descended, on her father's side, from Emily Astor Ward, the oldest daughter of William Backhouse Astor.  Her brothers and sisters started branches of the family connected to people I'm familiar with:  John Jacob Astor, whose son Waldorf Astor married Nancy Astor); Laura Astor Delano, Franklin Delano Roosevelt's great-aunt by marriage), and William Backhouse Astor, Jr., married to  Caroline Schermerhorn Astor, the Mrs. Astor (and Edith Wharton's cousin), whose son, John Jacob Astor IV, died on the Titanic.  {Sorry... I learned all of this on Wikipedia.  I love family trees.}

But Emily Astor Ward's branch is almost more interesting, at least to me. She married Samuel Cutler Ward {the brother of Julia Ward Howe, who wrote the words to The Battle Hymn of the Republic}. Their daughter Margaret married John Winthrop Chanler, a New York Congressman {Wikipedia, still}; when Margaret and John died, within two years of each other, they left behind nine children, aged 4 to 15, who became known as the 'Astor Orphans.'  The Orphans grew up, 'wildly,' at Rokeby;  they were the 'country Astors,' looked down on, and meddled with, and improved, by the 'city Astors.'  Alexandra Aldrich retells some of the stories she has heard about them (an escape from an insane asylum for one, a portrait by John Singer Sargent of another), though I don't remember her mentioning {sorry, Wikipedia again, last time, I promise} the sister who "died of a surfeit of Turkish Delight.' Then there's this wonderful scene, when she and her younger cousins play dress-up in one of Rokeby's crumbling rooms:

Maggie lay on a sofa with a torn floral slipcover, dressed in a gown of robin's-egg blue and inhabiting the role of our great-great-grandmother Maddie Chanler. Her eyes were closed and her arm was draped dramatically over her forehead.
'Come see your Mama Maddie now,' Diana, in the role of Cousin Mary, said to the [dolls] in her arms. She then placed them gently around Maggie.
'Thank you, Cousin Mary,' Maggie said to her sister. Then she turned to her babies. 'Your mama is dying. She has ammonia.'
'It's pneumonia,' I called out over the music. We all knew the story from Maggie and Diana's father, who lectured historical societies as they toured the house.
'You see?  I'm dying, and she's still correcting me!' Maggie momentarily lost her composure, then resettled into character. 'Rokeby has always taken care of its orphans. My mother ... What was my mother's name again?'
'Emily Astor,' I called out over the decrescendo as a chip of ceiling paint fell onto the piano.
'My own mother, Emily Astor, died when I was just two years old. And my grandparents...' She paused.
'The William B  Astors,' I called over the trill.
'... raised me here at Rokeby as their own daughter.'
Diana bit her lip as she fished for the next line, then blurted out, 'And they banished that vile father of yours!'  Diana was playing Mary Marshall, a cousin who became the orphans' primary guardian. 'Sam Ward!  His name should not even be spoken in this house!'
'But what did my daddy do?' asked a languishing Maggie.
He was a bohemian spendthrift!'
Hanging like an idol on our drawing room wall, a youthful Great-Grandma Margaret -- one of the youngest of these bereft babies -- looked on from her gilt frame. She was seated on the front porch in a raven-black gown, poised and self-righteous with her back ramrod straight and her thin, elegant hands resting on her full, bombazine-coated lap. It was the same gown Diana now wore.

You can see that I was more drawn to the family history than to the author's childhood memories;  she lives {in spite of the book's title} with her unemployable father and artistic Polish mother in a few rooms of the mansion, visits her condescending uncle and aunt in their wing, and her generous, disapproving, alcoholic grandmother in her house nearby, and dreams about a different life. (The book ends when she leaves for boarding school.)  I've been reading a little about the enormous, sad, wasteful wealth created in the Gilded Age and lost very soon after, and the gist of this story is that the generations still living to Rokeby inherited property, but not wealth, and seem ill-equipped to live beyond its walls. One of the reviews I read said that this is a book about a life that you would not want, but for me, there's enough quirkiness, and humor, and history, in it to make it worth reading.
Noted under: History, Memoirs