A Lot to Ask: A Life of Barbara Pym 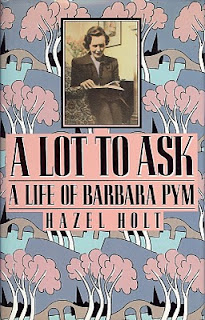 I didn't mean to jump the gun on our much-anticipated Barbara Pym Reading Week (which starts Saturday), but now that I've finally  read this biography (a book that I have owned since 1991) I'm looking forward to it even more. I'm curious... are you interested in the biographies of the authors you read?  Does reading a biography enrich your reading of the novels or the poems, or does the work stand on its own? {I'm definitely in the first camp.}

If you are, too, this could be a good companion to reading the novels. It isn't the best biography I've ever read, not as well written, not told by a powerful storyteller, but it does a very good job of capturing Pym's experiences, her personality and her voice.  It's interesting to read a biography written by someone who knew her subject personally; after a stint in the British Wrens during World War II, Pym went to work as an editor at an institute studying African anthropology, and Hazel Holt, younger and just out of university, starting work there soon after, eventually as Pym's assistant. {So it's not an arm's length, completely objective portrait either.}

I really don't remember how or when I first 'discovered' Barbara Pym, but I used to be good at writing my name and the date I acquired them in my books, and I have a paperback copy of The Sweet Dove Died, one of her last novels, that I purchased in 1981.  So I was in college!  (A niece and a nephew just graduated this weekend and last, so I am feeling nostalgic. And old.} It was surprising to realize, now, that at that time she was more or less a 'contemporary' novelist (she died in 1980 and her last two books were published a few years earlier).

I learned that she wrote from life, bringing her experiences -- Oxford, the Church of England, the African institute, anthropology, village life, city life -- and even her friends into her books, but infusing them with her own sense of humor and irony.  It's a life I enjoyed reading about, from the story of her father's parentage to her passionate 'love affairs' {I'm putting that in quotes because that's what she called them, and there's a politeness or maybe primness in the biographer's voice that makes it hard to tell what that meant exactly} to what is described as her 'knack' for forming lifelong friendships with old loves. The best parts of the book, understandably, are the extracts from her letters and diaries.

She's so different from some other authors I've been reading about {Dickens, Edith Wharton} who are easy to admire but harder for me to like.  When you fall for a writer {the person, not just the books} it's very moving to follow the road that she traveled as a novelist -- writing parts of  her first novel for her friends, when she was still at Oxford, early rejections, finding a publisher for one of those early novels when she was 37, publishing several more, then being suddenly and coldly told that her next novel, and all of her earlier ones, were unpublishable (in the financial sense), and still writing, in spite of that, until she was re-discovered and published again sixteen years later, near the end of her life.

I'm glad in a way that my very bad habit of buying books and not reading them has let me read this one right before dipping into the novels again.

I'm glad to learn more about Pym just from your post! I definitely enjoy learning more about the writers I love - though I think if I discovered something really bad, it might change how I feel about them & their books.

It helps me to read this post, and catch some of your enthusiasm because I'm halfway through A Glass of Blessings and I'm bored to tears! Hopefully, Pym Week will enlighten me as to the wonders of this author, (By the way, I graduated college in 1983, so we can be "old" together. xo)

I enjoy reading about favourite authors although sometimes I wish I hadn't. I loved May Sarton's books but after reading a biography of her, I haven't been able to read anything else. Her memoirs about living the solitary life need to be taken with a barrow load of salt as she wasn't alone very much at all & I felt cheated. On the other hand, I love reading about Jane Austen, the Brontes, Edith Wharton, Vera Brittain as the biographies seem to enhance the experience of reading the work. I also enjoyed the Pym biog though it's many years since I read it. It reminded me of Vera Brittain's biography of Winifred Holtby as they were also friends & it was a very affectionate portrait. I was happy to accept the partiality for the sake of the personal knowledge of the subject. Did you know that Hazel Holt writes cosy mysteries? They're very good, set in Devon with a retired teacher, Sheila Malory, as the sleuth.

You have me wanting to read this one, and the library has a copy!

This is one I didn't know about so thanks for the heads up, Audrey! I've pulled my copy of A Very Private Eye from the shelves for the upcoming Pym Reading Week. It's a bit of an autobiography in the form of letters and diary entries and should be good for dipping in and out of at bedtime. It was lying in a box of cast-offs in a bookshop in Stratford, the man who owned the shop said his mum likened a Pym novel to a warm brown sweater. I like that!