Sunday reading: Commissario Brunetti in the library with a ... 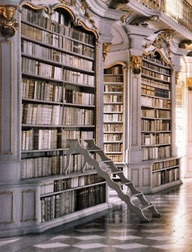 
The woman paused in front of another door long enough to poke her cigarette into a brimming ashtray that stood on a walnut table. This door led to a dimly lit room that must once have been a library. Most of the shelves were empty, and what books remained lay like rectangular drunks, any which way, on the shelves. There was even a rolling wooden ladder attached to the shelves, leading up to the highest, they too almost completely devoid of books.
There was no smell of cigarettes in the room. No dust lingered on the books; the carpet was so freshly vacuumed that their shoes left prints on the pile. What little light remained in the day came effortlessly through the windows, which showed no trace of dirt or grime.
Lucretia lowered herself into the middle of plush sofa, her feet flat on the floor in front of her. She motioned them to the chairs which sat opposite. 'What about her?' she asked. ...
'She was very young, wasn't she?'
'She was fifteen when she came here,' she said. Her displeasure hit harder on the words this time, again giving voice to whatever she had drunk or used. 'It depends on how young you consider that.; Brunetti thought the age uninteresting; it was her response to it that struck him:  why would she remember something like that from half a century ago?
'It's a dangerous age,' Griffoni stunned him by saying, not so much for the words as by the fact that he had all but forgotten about her, sitting there, humble, plain, silent. Waiting.
Lucrezia's eyes swivelled in the direction of the woman next to Brunetti and she studied this suddenly vocal thing. Griffoni was looking at the hands clasped in her lap, but enough of her face was visible for the other woman to see the suddenly furrowed brow and tightened mouth.
'Dangerous,' Lucrezia repeated with no expression at all. It might as easily have been a shoe size she was giving. With no explanation, she got to her feet, crossed the room, and went out, leaving the door open behind her.
Brunetti turned to his colleague with an inquisitive glance, but she, perhaps thinking of Lucrezia's silent feet, held a finger to her lips and shook her head. He looked around the room again, made uncomfortable by the contrast between the spotless cleanliness and the disorderly state of the books.


I'm voting for the woman in the palazzo to be the murderer (if there was a murder), not only because her name is Lucrezia but because she has a rolling library ladder and no regard for her books. :)

Sigh. April has been less than enchanted, so far, but things are getting back to normal, and I found time today to sink into my slightly overdue library book.  In Donna Leon's newest book, The Golden Egg {I was literally just going to write that the significance of the title hasn't been clear yet, and then it hit me}, when Paola tells him that the disabled man who works at the dry cleaner's has died, and she regrets not even knowing his name, Brunetti and his cohorts begin to look into his death and his mother's strange unwillingness to talk about him. Sometimes I think you want a book to surprise you, and send you somewhere new, and sometimes you're perfectly happy that the Brunettis and Signora Elettra are just as they've always been.

But maybe a little more serious, or angry, or sad?  The subject {the mistreatment of a child}lemds itself to that, but even Signora Elettra was a little dark. On the other hand, the opening scene, with the Brunettis at dinner, was wonderful.  This was a good (a very good) addition to the series, but maybe not the book to start with if you're new to these books.

{Image found on Google; web page link not working.  It is very hard to find a photo of a library with a rolling ladder and disordered books, and much more fun to just look for the ladders. }

Hope the week ahead is a little easier. I'll get around to Donna Leon one of these days...

I love Donna Leon's books, though I've only read two. Her Commissario is so compelling, not to mention Venice and libraries! Could I just live in the one you pictured for this week?