How to Create the Perfect Wife 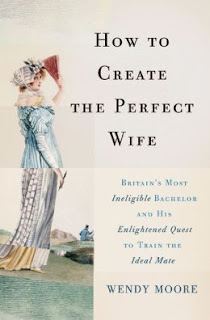 When I read about this book in the Sunday paper a couple of weeks ago, I imagined right away that it would suit my love for unusual biographies ... and the Jane Austen-y cover and the reference to 'Britain's most ineligible bachelor' only clinched things. When I found myself with some (ahem) unexpected time at home last Friday, this was the perfect book to curl up with and turn the TV off for.

As it turns out, our ﻿lovestruck hero (except that he wasn't one) is Thomas Day, a gentleman. born around 1750, who was educated at Oxford and then began studying law in London.  The book describes Day as being eccentric and unconventional:

Although he was certainly clever, undoubtedly well educated and was shortly due to inherit a considerable fortune, Day's personal were decidedly marred by his comical appearance and unconventional manners. Tall and well built, with curling black hair and large hazel eyes, he might have been considered handsome were it not for his stooped shoulders, the severe smallpox scars that pitted his face, and his oddly dishevelled appearance. Scornful of the contemporary custom for cropped hair covered with a neat wig, Day left his hair long, lank and tangled. Eschewing fashionable dress, he wore plain, drab clothes which were invariably crumpled and askew. Even his close friend Edgeworth had to admit:  'Mr. Day's exterior was not at that time prepossessing, he seldom combed his raven locks, though he was remarkably fond of washing in the stream.' ...

{I enjoyed the chapter, later in the book, about Day's efforts, at the insistence of one of his potential wives, to transform himself into a suitably dressed, suitably accomplished Georgian gentleman.} 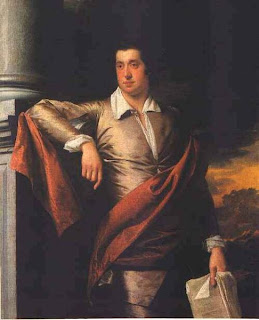 His interior was not very prepossessing either, then or later.  It was interesting to read that Oxford and Cambridge were, in Day's time, in serious decline, with few professors or classes and a lot of drunken students; Day was one of the few who actually read and engaged in philosophical debates.  He was a follower of Jean-Jacques Rousseau, and Rousseau's ideas on education and the simple life influenced Day's eccentric thinking on the way he and his future wife would live, and his damaging thinking on how he could best bring that about.

As the book opens, his first (or maybe it was his second?) fiancee Margaret (his close friend Edgeworth's sister) has just written to break off their engagement -- one of the many women who escaped just in time. I always hesitate to give away too much of what happens (if a biography can have a plot, this one does!), because letting the story unfold is a big part of the pleasure of reading a book like this, but it might be okay to say that when Day (now in his early twenties) despairs at finding a woman who has been raised and educated in a way that would let her become his ideal wife, he and his friends decide to visit a foundling hospital in search of a young girl that he can 'mould,' using Rousseau's principles, to this purpose. Without telling them about his plans, Day ends up apprenticing two girls, eleven and twelve years old, to ensure that one of them will work out. For me, the foundling who he keeps, a girl he renames Sabrina, becomes the most sympathetic and admirable person in this strange and creepy and oddly fascinating story.

There are also a lot of interesting literary connections that emerge {something else I always hope for in a biography!). The Edgeworths were the father and aunt of novelist Maria Edgeworth, and Sabrina later worked for more than 30 years as a housekeeper at a school run by Charles Burney, the brother of Fanny Burney.  But there was also a little unexpected treat for me ... a connection to Henry James, who used the story of Day and Sabrina as the basis of his first novel, Watch and Ward.

Sounds like the perfect diversion from last Friday's unfolding events... such a scary day. I'm adding to my wish list, once again.