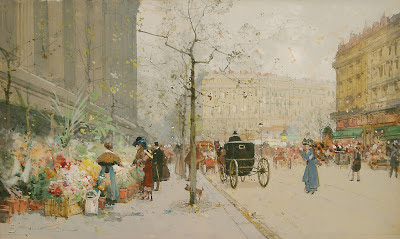 She had arranged with the George Vanderbilts to rent their apartment at 58 Rue de Varenne, and she and Teddy were settled there in time for her forty-fifth birthday. 'There was a curious strangeness,' she wrote Sally Norton, in keeping a birthday in my own home, as it were, yet in a 'foreign' place.' It was, of course, not altogether her own home, it had been furnished by other hands. But she was thrilled by its beauty and surroundings.

We are peacefully established in this very beautiful apartment, with charming old furniture, old Chinese porcelain and fine bronzes, against an harmonious background of real old boiseries (the hotel was built in 1750) in the heart of the most delightful part of Paris and just two steps from my dear 'Minnie-Pauls' who are well and cheerful, unusually, and with whom we 'voisiner' very much.

'The most delightful part of Paris' was the Seventh Arrondissement, a lozenge-shaped section on the Left Bank that descended in narrowing fashion from the long stretch of quays (Branly, d'Orsay, and others) along the Seine to the point where ther Avenue de Suffren and the Rue de Sevres intersect. The heart of it was the age-old Faubourg St. Germain.
Faubourgh is a variously translatable word -- 'quarter' is perhaps the nearest English equivalent for this use of it, and as to the Faubourg St. Germain, it yields less to a geographical than to a social, historical and intellectual definition. It was the town seat of the most imposing of French nobility; an aristocratic society slowly being penetrated by bourgeois artists and intellectuals; the standard of social behavior for the other faubourgs of Paris; an atmosphere, a cluster of traditions, a wholly assured but to the outsider a strangely inconsistent human world. ... 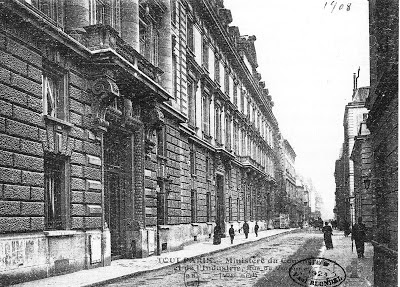 Whatever its contours, the Rue de Varenne undoubtedly ran across its center. A narrow, quiet, tree-lined street, it made its brief way, between the high indifferent walls of the hôtels, west from the Boulevard Raspail past the Rude du Bac and Rue Vaneau down to the Boulevard des Invalides. It was on the last corner, in the Hotel Biron, that Rainer Maria Rilke would install himself in a year or so and persuade Rodin to join him and set up a studio; soon afterward young Jean Cocteau, scarcely out of school, would come to live there as a sort of houseboy. 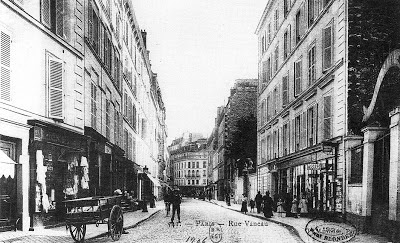 France in 1907, and especially Paris, was in the midst of what the French, looking back nostalgically, came to call la belle époque, the period from the turn of the century to the outbreak of the Great War in 1914. The phrase conjures up a richly assorted spectavle:  ... elegantly attired aristocrats and expensively gowned if suspect ladies gathering after midnight at Maxim's in the Rue Royale; bearded gentlemen wearing dark clothes and bowler hats in the winter, white linen and Panama hats in the summer; women wearing long, flowing,. brightly colored dresses and hats with plumes and artificial fruits and flowers, bosoms accentuated by hidden supporters, waists held in tight by belts; the worldly salons of the idle nobility along the Champs Elysees and near the Place d'Etoile, the more traditional and intellectual ones peopled by the Proustian figures in the Faubourg St. Germain; aperitifs at Fouquet's, boating on the Seine, the Tuesday evening galas at the Comedie Francaise, and everywhere a riot of the peculiarly intense Paris colors.

The period had indeed an air of unshakable stability, even of permanence. ... Housekeeping costs had scarcely varied in thirty years. The Whartons probably paid the equivalent of about eighty dollars a month for one of the more luxurious apartments in the city -- six or seven rooms, a kitchen and pantry, and two baths, no more than they would have paid in 1875. Long-established and seemingly unchallenged class distinctions were evident in the very cut of the beard and shape of the moustache.

from Edith Wharton:  a biography, by R.W.B. Lewis 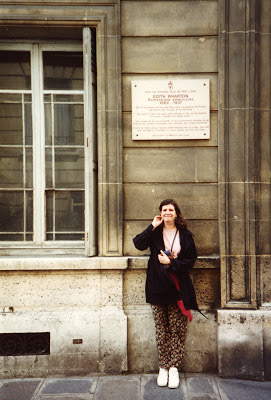 {The painting is Paris, Le marche aux fleurs, by Eugene Galien Laloue (1854 - 1941), found here;  the old photos of the Rue de Varenne and the Rue Vaneau, c. 1908, are in Edith Wharton:  an extraordinary life, by Eleanor Dwight; the photo at the bottom was taken by my sister, the best and most accommodating travel companion a person could wish for.}

Noted under: Biography, Edith Wharton, My Year with Edith

Is that you in the photo? So nice to see the face behind the blog :-)

That's a nice surprise! Thanks for sharing the pic. Yes, it is great to see the face behind the blog.:)