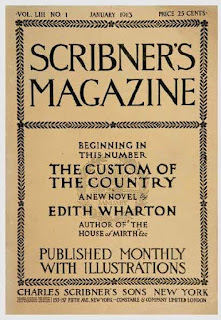 I'm not sure why, but in all my earlier reading of Edith Wharton, and all my future plans to read her, The Custom of the Country was never really on the list. But Edith has been writing it (in fits and starts) in the biography I'm reading, and The Mount is celebrating the book's 100th anniversary by re-creating its original publication in serial form, and JoAnn was sure I would love it.  The Mount's serial started in January (exactly 100 years after it started, in Scribner's Magazine), so I'm already three months behind, but I'm going tocatch up by next month.  And JoAnn is right...I do love it.


The Spraggs -- Abner, Leota, and their beautiful daughter, Undine -- have moved from Apex City (which is somewhere in the Midwest, it seems) to turn-of-the-century New York.  On the advice of Undine's school friend, the formerly wonderfully named Mabel Blitch, they are living in the 'sodden splendour' of the Hotel Stentorian, and Undine can look across Central Park to the mansions on Fifth Avenue.

They had lived in New York for two years without any social benefit to their daughter; and it was of course for that purpose that they had come. If, at the time, there had been other and more pressing reasons, they were such as Mrs. Spragg and her husband never touched on, even in the gilded privacy of their bedroom at the Stentorian; and so completely had silence closed in on the subject that to Mrs, Spragg it had become nonexistent; she really believed that , as Abner put it, they had left Apex because Undine was too big for the place.

Hmmm, intriguing.  Undine is kind of deliciously awful; some of her ideas on how to behave, and how to entertain, and who's who on the social ladder come from Mrs. Heeny, a coarse but well connected society mancurist/masseuse, and from the Boudoir Chat column in the Sunday newspaper.


Even in Apex, Undine's tender imagination has been nurtured on the feats and gestures of Fifth Avenue. She knew all of New York's golden aristocracy by name, and the lineaments of its most distinguished scions had been made familiar by passionate pouring over the daily press. In Mabel's world, she sought in vain for the originals, and only now and then caught a tantalizing glimpse of one of their familiars.

Thanks to Mabel, Undine has been noticed by Claude Walsingham Popple, a society portrait painter, but Mrs. Heeny lets her know that his smaller, quieter, more insignificant friend, Ralph Marvell, is more worth her while. When Ralph's sister, Laura Fairford, invites Undine to dinner, Mrs. Heeny is there, in her 'double role as manipulator and friend,' to tell her what's what.


'Well, there you are... When a young man in society wants to meet a girl again, he gets his sister to ask her.'
Undine stared at her incredulously. 'How queer! But they haven't all got sisters, have they? It must be fearfully poky for the ones that haven't.'
'They get their mothers - or their married friends,' said Mrs. Heeny omnisciently.
'Married gentlemen?' enquired Mrs. Spragg, slightly shocked, but genuinely desirous of mastering her lesson.
'But are there never any gentleman present?' pursued Mrs. Spragg, feeling that if this were the case Undine would certainly be disappointed.
'Present where? At their dinners? Of course -- Mrs. Fairford gives the smartest little dinners in town. There was an account of one she gave last week in this morning's Town Talk.  I guess it's right here among my clippings.' Mrs. Heeny, swooping down on her bag, drew from it a handful of newspaper cuttings, which she spread on her ample lap and proceeded to sort with a moistened forefinger. 'Here,' she said, holding one of the slips at arm's length, and throwing back her head she read, in a slow unpunctuated chant:  'Mrs. Henley Fairford gave another of her natty little dinners last Wednesday; as usual it was smart small and exclusive and there was much gnashing of teeth among the left-outs as Madame Olga Louskowska gave some of her new steppe dances after dinner' -- that's the French for new dance steps,' Mrs. Heeny concluded, thrusting the documents back into her bag.
'Do you know Mrs. Fairford too?' Undine asked eagerly; while Mrs. Spragg, impressed, but anxious for facts, pursued:  'Does she reside on Fifth Avenue?'
'No, she has a little house on Thirty-eighth Street, down beyond Park Avenue.'
The ladies faces drooped again, and the masseuse went on promptly:  'But they're glad enough to have her in the big houses! -- Why, yes, I know her,' she said, addressing herself to Undine. ... 'She's got a lovely manner, but no conversation. Some of my patients converse exquisitely,' Mrs. Heeny said with discrimination.

It's all kind of irresistible, so far. :)

{If you're interested in reading along, The Mount is posting the monthly installments here.}

Noted under: Edith Wharton, Fiction, My Year with Edith

And it only gets better! Undine is one of the most memorable characters I've come across... can't wait to see your reaction as her adventures progress.

I really want to reread The Custom of the Country, but feel like I must get to The Age of Innocence first.