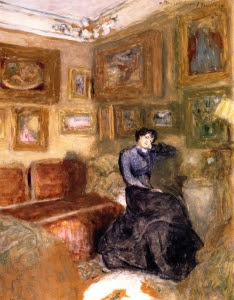 It begins with a unfastened glove:


John Durham, while he waited for Madame de Malrive to draw on her gloves, stood in the hotel doorway looking out across the Rue de Rivoli at the afternoon brightness of the Tuileries gardens. ...
But today, if the scene had never presented itself more alluringly, in that moist spring bloom between showers, when the horse-chestnuts dome themselves in unreal green against a gauzy sky, and the very dust of the pavement seems the fragrance of lilac made visible -- today for the first time the sense of a personal stake in it all, of having to reckon individually with its effects and influences, kept Durham from an unrestrained yielding to the spell. Paris might still be -- to the unimplicated it doubtless was -- the most beautiful city in the world, but whether it was the most lovable or the most detestable depended for him, in the last analysis, on the buttoning of the white glove over which Fanny de Malrive still lingered.

To Durham, a successful American businessman visiting Paris with his mother and sisters, 'the mere fact' of the woman he loves'having forgotten to draw on her gloves,' after visiting them, is an encouraging sign He had known Madame de Malrive in New York, when she was Fanny Frisbee; he finds her elegant, sophisticated, and more interesting now, but she tells him that it has made her happy to be with 'dear, good, sweet, simple, real Americans again!' Fanny has separated from her husband, a philanderer from an old, 'reprehensible' French Catholic family. But when they walk in the Tuileries, and he offers to marry her once she is divorced, she insists that she can't risk losing her son, now or later.

Durham learns that Fanny's husband's sister, Madame de Treymes, is sympathetic, and he visits the de Malrive's townhouse in the Faubourg St. Germain in the hopes of meeting her.

The sense of the distance to which [Fanny's] American past had been removed was never more  present to him than when a day or two later, he went with his mother and sisters to return her visit. The region beyond the river existed, for the Durham ladies, only as the unmapped environment of the Bon Marche; and Nannie Durham's exclamation on the pokiness of the streets and the dulness of the houses showed Durham with a start, how far he had already travelled from the family point of view.
'Well, if this is all she got by marrying a Marquis!' the young lady summed up as they paused before the small sober hotel in its high-walled court; and Katy, following her mother through the stone-vaulted and stone-floored vestibule, murmured:  'It must be simply freezing in winter.'
In the softly faded drawing-room, with its old pastels in old frames, its windows looking on the damp green twilight of a garden sunk deep in blackened walls, the American ladies might have been more conscious of the insufficiency of their friend's compensation, had not the warmth of her welcome precluded all other reflections. It was not till she had gathered them about her in the corner beside the tea-table, that Durham identified the slender dark lady loitering negligently in the background, and introduced in a comprehensive murmur to the American group, as the redoutable sister-in-law to whom he had declared himself ready to throw down his challenges.

Madame de Treymes is observant, witty and a little treacherous; she offers Americans like Durham's cousin, Mrs. Boykin, an entree into Parisian society by forcing them to spend a lot of money at the charity bazaars she organizes, and she is known to have 'a history':

... 'Well, Madame de Treymes has not been like a happy country ...  Of course you know the Prince d'Armillac by sight?  No? I'm surprised at that. Well, he's one of the choicest ornaments of the Jockey Club:  very fascinating to the ladies I believe but the deuce and all at baccarat. Ruined his mother and a couple of couple of maiden aunts already -- and now Madame de Treymes has put the family pearls up the spout and is wearing imitation for the love of him.'
'I had that straight fro my maid's cousin, who is employed by Madame d'Armillac's jeweller,' said Mrs. Boykin with conscious pride.

When Durham asks Madame de Treymes for her help in convincing the de Malrives to allow the divorce, she is desperate enough to ask him for help in return, and when he refuses, there is a twist in the story, and then another well-plotted turn.

When I was slowly reading Jenny Uglow's wonderful biography of Elizabeth Gaskell, the year before last, I fell into a 'system' -- one that I grew to like -- of reading up to a certain point, and then turning to the book that had just been written.  I'm about halfway through re-reading R.W.B. Lewis' biography of Edith Wharton, and it has taken me past The House of Mirth (1905) and into the early years of E.W.'s decision to spend more time in Paris.  In 1907, when she wrote this novella, she had just begun living in the formal, aristocratic, traditional neighborhood of the Faubourg St. Germain. Her biographer notes that 'Madame de Treymes' was 'the first fruit of her dip into Parisian society,' and that 'something of Edith Wharton's sense of herself in 1906' -- as a woman in an unhappy marriage, and imprisoned 'even under the most gracious of conditions' -- went into the story.  It's always interesting to me to see these biographical connections, even though E.W. seems to have felt a connection this neighborhood, as she settled into it, and, interestingly, it's not portrayed in that welcoming light in the story.  Professor Lewis also suggests that her 'discerning eye' was 'sharpened, it seems' by a re-reading of Henry James' novel, The American {which I loved when I finally read it, and I remember it having something of the same setting and situation.}

The biography is pointing me now {perfect timing!} toward The Custom of the Country, which E.W. has been writing, on and off, for several years, in between visits with Henry James and trysts with Morton Fullerton.  It has also led me to another story, with another glove, but more on that when that book comes in from the library.

What an ingenious biography-reading method! I was headed in that direction with Richard Yates bio a couple years ago, and have been turning to Edna St. Vincent Millay's poetry as I read about her life, too.

I think you will love The Custom of the Country. Undine is truly one of Wharton's most memorable characters.