Found on a blog: Julia in Ireland 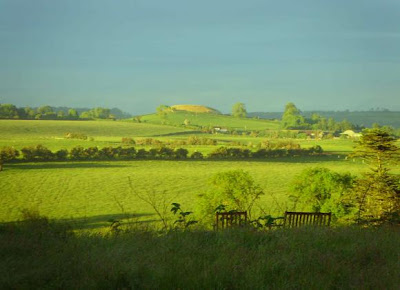 {Found on Fleur Fisher in Her World and I Prefer Reading. Thanks, Jane and Lyn!}

'She seemed to be enjoying the Tangiers job when she came back for Christmas,' Edina said. 'She loves Morocco.'
'Who wouldn't?' said Mrs. Hathaway. 'Such a lovely climate, and such flowers! And I gather she has been remarkably successful in her work.'
It was now just over two years since the widowed Julia Jamieson, whose husband had been killed on a mission to Central Asia, had been taken on officially by his service, British Intelligence, and after a little preliminary training in the London office had been sent out to Tangiers, where she had many friends and contacts. Meanwhile her small son and his Nanny had been parked with her cousins at Glentoran, where there was a sizable Reeder brood in the ample nurseries.


I have been hearing about Ann Bridge's novels for a long time, but since they're not immediately available they've been stuck on my reading list. Because I love series mysteries so much, and I'm always running out of them :), I've been especially looking forward to her Julia Probyn novels. I guess they might be considered spy novels, instead of mysteries, because Julia works for British Intelligence. From what I''ve read, there was a series of eight books, written in the 1950s and 1960s, set in places all around the world.  Lyn has written a wonderful summary of the series, and told us more about the author; she also says that this book -- the last one in the series -- is very different from the others, but now that I've read it I'm looking forward to the first seven even more.

As the book opens, Julia {the paragraph above is all we newcomers learn about her} has come back from Morocco, to visit her cousins in Scotland, see her young son Philip, and decide whether she wants to marry Gerald O'Brien, an Irish lawyer she met in Tangiers.


... 'No, Mummie's going to have her tea now; and so are you, when the others come up. You may see her after tea, if you're good. Oh, I am ashamed of you, behaving like that in front of strangers! Whatever will Mr. O'Brien think of you?'

Poor Julia, over the usual ample tea in the hall, was secretly asking herself the same question. Philip Reeder's immediate assumption that if she was bringing a man to Glentoran it could only mean one thing had in fact not been far off the truth -- the question of marriage had been raised between her and Gerald O'Brien. But Julia had been guarded and hesitant; she had insisted, as an indispensable preliminary before anything was decided, that he should take a good look at what she called her 'encumbrance'; he, for his part, was equally insistent that she should come over to Ireland and see what he had to offer in the way of an establishment and surroundings, especially human surroundings. It was the sensible, civilised attitude of two people already mature who though drawn deeply to one another, were no longer of an age to be blinded by sense-enchantment, nor at the mercy of the selfish recklessness of young love.

Most of the story takes place in Ireland, at Gerald's home and in the neighboring town where Julia's friends, the O'Haras, are among the local gentry. Julia meets his neighbors, and befriends a young woman with small children who she met on the train. At Gerald's urging, she looks over his house, choosing rooms for her son and his nanny, buying an electric percolator to save Gerald from his housekeeper's terrible coffee, and asking if he would mind if she hung her Seurat over the fireplace. The characters are all likable, and well-drawn, and there is a lot of detail about landscapes and houses. As I said, I haven't read the other books, but if there can be 'cozy' spy novels, like there are cozy mysteries, I'd be very happy with that. :)

There is a mystery of sorts. Billy O'Rahilly, a slightly unsavory local poet, has been trying to build a hotel and casino in the area, and Gerald and Julia's friends are concerned about the negative effects that a lot of money and temptation for part of the year and unemployment in the off-season would have.  When he hears that a rich and eccentric elderly woman, Mary Browne, is tempted to sell him some land, Gerald enlists Julia to visit her.

She had decided not to give any notice of her coming, on this occasion. Ponticum Cottage stood off the road, on a little promontory in the lake:  a short drive, with abundant clumps of the hideous plant which gave it its name on either side. Owing to the ponticums Julia couldn't see if there would be room to turn the car, so she left it on the road, and walked down the drive. It was a windy day, all down the lough little waves, white-capped, sparkled in the sun. Close to the cottage the rhododendrons ceased, and there was, she saw, ample turning space in front of the low one-storey building; a window in a room on the right was open, and Julia was just thinking what a lovely view it must have when there came a sudden gust of wind and out of the window poured a shower of pieces of paper, some coming right to her feet. Julia stopped to pick them up; short-sighted as she was, it was only when she had them in her hand that she realised what they were -- £5 pound notes! As she ran to and fro, picking them up -- the wind, circling in front of the building, blew them this way and that -- the window was slammed down; a moment later the door opened, followed by a fresh volley of currency, and storm of oaths in colloquial French, of which Merde! was the mildest. Julia, rather out of breath, began to laugh, while she continued to pick up the fivers:  the door was slammed to again -- when she had collected all she could see she went up and rang the bell.
It was opened by old Lady Browne. 'Have you got them all?' she asked at once.

Most of the slow, gently meandering plot involves efforts by Gerald, Julia, the O'Haras, the handsome, earnest village priest, Lady Browne's sensible grandson, and their friends and neighbors to prevent Lady Browne from selling her land and to ferret out the speculator who is secretly and unscrupulously trying to buy it.

You almost know that everything will work out as it should, and yes, reader, she marries him. :)

I read a preview copy of Julia in Ireland, provided by Bloomsbury Publishing, via NetGalley. Their Bloomsbury Reader imprint is re-publishing some of Ann Bridge's books in paperback and e-book form.

Noted under: Ann Bridge, Found on a Blog, Mysteries

I've had this series in mind too, hoping that they'd be available in the US at point. It sounds like that may happen sooner rather than later!

I like your title for this. I try to keep track as well - since so much of my reading these days seems inspired by reviews like yours - and most of my never-ending TBR stacks :)

I love the idea of this feature, and have had my eye on this series at NetGalley. Need to catch up with a few other things first...

I'm glad you enjoyed Julia although I'm a bit surprised that Bloomsbury would put the last book in the series on NetGalley. As I said, it's not really representative but as it's inspired you to go back to the beginning & read the others, they may know what they're doing after all! There are also lots of stand alone books by Ann Bridge that I want to read. I've read Peking Picnic & Illyrian Spring & enjoyed them both. Bloomsbury have lots of others as ebooks as well. So many books...