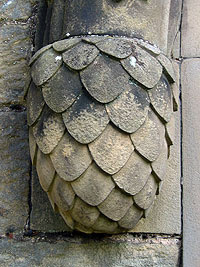 It is in her buildings that we have to look for her; she left stones and wood, not letters, for us to read.

Sometimes I think that the only thing better than finding and reading a new biography of someone I know about, or have wanted to learn about, is finding and reading one of someone I have never heard of, and would have missed knowing. When Lyn (thanks, Lyn!) mentioned on her wonderful blog, I Prefer Reading, that Jenny Uglow had written a new book about an English woman named Sarah Losh, I immediately went in search of it -- initially because of its author (she wrote the extraordinary biography of Elizabeth Gaskell that I read in 2011).  Miss Losh was an intelligent, independent, unusual, much-loved woman who left behind a unique work of art, and I'm glad she found such a gifted biographer. I found it a tiny bit hard-going at first {that was probably me, not the writing}, but when I had an unexpected afternoon off, and then a perfect day for nothing but reading, I picked The Pinecone up again and read the rest of it wrapped up in a wooly sweater and in the story.  :)

Sarah Losh was born in 1786, into an extended family that earned its wealth first as landowners, then as inventive  industrialists.  Her father and her uncles {especially her Uncle James, who helped to educate her] were scholarly, well-read and well-traveled, friends with William Wordsworth and his sister Dorothy, interested in political change, religion, history, antiquities and science; when their older brother died in infancy and their younger brother began to show mental and physical disabilities, Sarah and her beloved sister Katharine became the heirs to the family's houses and landholdings, and their business and intellectual interests.

It was of course tempting for me to think about her as a contemporary of Jane Austen (she was 11 years younger), and for her biographer, too {describing Sarah as a young girl visiting Bath with her aunt and uncle, a year after J.A. visited Bath for the first time -- of course, I hoped they'd meet -- and comparing the bond between Sarah and her sister to the one between Jane and Cassandra}.  But there's a stronger connection to someone else who's been in my reading recently:

Sarah was a good gardener, especially keen on unusual shrubs and trees. But she was eager to learn and often stuck to her desk and her books. ... She loved the classics, and would take a Latin book and read it casually in English with no hint of the effort of translation; when her current passion was Greek, she studied it for three hours a day, until she could translate virtually any Greek play 'almost on sight'. This was not a young woman who would be happy remaining a belle of the ball, spending her days in embroidery and making polite calls, dreaming of dandling babies. She anticipated women like George Eliot's Dorothea in Middlemarch, set in the 1830s, fired by a desire to learn. Like a real-life Dorothea, Sarah Losh might well have thought Causabon, labouring on his key to all mythologies, a more desirable husband than an amiable, hard-drinking Cambrian landowner or Newcastle merchant.

Later, she draws on Middlemarch again {noting that "Katharine was as different from her sister as George Eliot's Celia was from Dorothea; softer, 'fonder of geraniums, and seems more docile, though not so fine a figure'."}

Sarah and her sister never felt the need to marry, and their family's wealth, position, and love of learning allowed them to travel, to study in many different fields, and to serve as benefactors in their community.  Their first project was to rebuild a village school, and a small chapel in a new public cemetery, but Sarah's major work, after her sister's death, was to plan, design and literally oversee the building of St. Mary's Church in Wreay, a village near the family's country estate.  She even learned (and taught others) to  carve in alabaster, and helped make gorgeous altar candlesticks and a baptismal font for the church.

The church was unusual for its time architecturally, but even more so in its decoration. There is a row of angels (and palm trees) high above the altar, but Instead of overtly religious symbols and references, Miss Losh asked the craftsmen {often men from the village} to make carvings, stained glass windows and even figures resembling gargoyles in the form of animals, pine cones (a symbol of rebirth), lotus flowers and many other plants, insects, fossils, broken arrows {possibly in honor of a family friend killed in India} and even a dragon and a flying turtle.They're odd and incredibly beautiful seem to have been drawn from her interests in science, church history, ancient religions, architecture and many other fields, and to suggest that "life and art and creation will go on."

A very interesting book, and woman, and beautifully written, as I knew it would be.{The Pinecone has just been published in the U.S.}

I'm glad you enjoyed it. Sarah was one of a kind, wasn't she? She was lucky to have had the money to live her life as she wished to & she certainly didn't waste her opportunities. Thanks for linking to my blog as well.

Your first sentence could have been mine. The book is in my library pile and I just need to find the right moment.

Fascinating! I've never heard of Sarah Losh either, but seem to be in the beginning stages of a biography binge. Hope my library will be acquiring a copy.

I love the idea that Sarah Losh was like Dorothea. She and her classics books sound wonderful.

This sounds fascinating, and I'll be looking for a copy as well.