A Glass of Blessings 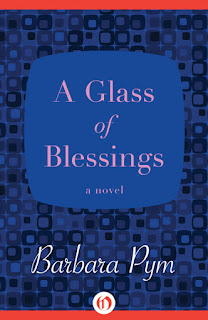 When God at first made man,
Having a glass of blessings standing by,
“Let us,” said he, “pour on him all we can.
Let the world’s riches, which dispersèd lie,
Contract into a span.”

So strength first made a way;
Then beauty flowed, then wisdom, honour, pleasure.
When almost all was out, God made a stay,
Perceiving that, alone of all his treasure,
Rest in the bottom lay.

When Open Road Media told us that they were re-publishing several of Barbara Pym's novels (and the lovely Barbara Pym Cookbook, written by her sister) in e-book form, I thought that was a very good thing, as most of her books are out of print here. I treasure my row of assorted and sometimes slightly tattered paperbacks, which I fortunately collected when I first read her a long time ago. Since a lot us will (I hope) be reading and re-reading her and making tea and scones and cauliflower cheese for her birthday in June, this just means that more people will be able to join in. :) {I have a recipe of sorts for the cauliflower cheese all picked out, and I don't even like cauliflower very much.}

For me, Wilmet Forsyth, the heroine of A Glass of Blessings, was alternately endearing and exasperating, but I think my friend JoAnn and I agree that it's best to see her as a product of her time. {The book was first published in 1958, and it's essentially set in its day.} She's in her early thirties, and after a brief fling with adventure during the war, when she served overseas with her friend Rowena and they met their husbands, she has settled in a comfortable, routine-driven life. Wilmet is elegant, refined, and well-dressed; she goes to church services and church socials, arranges flowers, goes shopping with Rowena, reluctantly befriends a spinster of the parish, and dabbles in Portuguese lessons and good works.

"I'd better go and change, then."
"Don't make yourself too grand, dear. I was just going to say that civil servants don't notice what their wives wear or the the wives of their colleagues -- one of those foolish generalizations that couldn't possibly be true."
"I suppose a female colleague would notice more."
Sybil laughed. "Those splendid and formidable women! I often think that was one of the reasons why Noddy didn't want you to have a job -- for fear you might turn into the kind of woman one sees getting out of the train at St. James's Park or Westminster, carrying a briefcase with E.R. stamped on it."
"I suppose some of them try to combine marriage with a career -- I mean the ones who carry baskets as well as briefcases and look both formidable and worried, as if they hoped to slip into the butcher's before going to their desks."
"Yes, though single women also have to eat or may be entertaining friends to dinner," said Sybil. "I read in the paper the other day of a civil servant who was discovered preparing Brussels sprouts behind a filing cabinet -- poor thing, I suppose she felt it would save a precious ten minutes when she got home."

It was hard not to like her; she is curious, self-deprecating and self-aware, knowing that her life is limited and unadventurous; but when she looks ahead and sees that giving blood and getting a little more involved in the parish might be her "fall programme," she's not dissatisfied with that.

There are a few references to Wilmet and Rodney drifting apart, and some funny, one-sided, rather "Edwardian" advances from Rowena's husband, but when Wilmet meets Rowena's handsome, mysterious, depressed, somewhat unsatisfactory brother Piers at a noontime church service, she makes it a project to find out more about him, and makes it something like a project to fall in love with him. She has a few pangs when Piers doesn't respond to her the way she hopes he will, but everything that happens to Wilmet happens on a peaceful, passive note, in a way that's ultimately funny for us and very often for her.  (And for Rodney, too; he starts out as a bit of a bore, but in the end he's always laughing at the right times.)

"...Now do tell me about those poor things at the clergy house. I suppose Mrs. Greenhill's back there now?"
"Yes, she agreed to go back -- mainly because she's so devoted to Father Bode. And of course when Father Thames retires in October she'll have him all to herself, until another priest comes, I suppose."
"The poor things," Mr. Bason sighed. "Cod on Fridays, and those endless cups of tea."
"I met Mrs. Greenhill the Friday before we came away and couldn't resist asking what she was giving them, and of course it was cod! I couldn't help feeling a little sad, remembering scampi and all the lovely things they had when you were there."
"Remembering Scampi" said Rodney thoughtfully. "Surely that ought to be the title of a novel?"
"Yes, I agreed, "though it might be a little too esoteric for a book about a clergy house. People would never guess, would they? Cod on Fridays would be too obvious, on the other hand."

It's been a long time since I read my Pyms, but I did remember the humor, and the attention to the ceremonial and day-to-day world of the Anglican church, and the food.  What was surprising about this book for me were all the gay men; nothing is ever said outright, but there's acceptance along with humor.

Re-reading A Glass of Blessings was a treat, as I knew it would be; it made me want to know more about Rodney and Prudence, and to long even more to reconnect with my Pyms. That, and possibly a new set of curtains for the drawing room, might be my summer programme, and I wouldn't be dissatisfied with that. :)

{I received a preview copy of A Glass of Blessings from Open Road, via NetGalley.}

Wilmet is definitely a product of her time, and I both appreciate and make allowances for her because of it. This is my favorite Pym so far (I've only read four), and I have Some Tame Gazelle ready to go for Thomas and Amanda's Pym month in June. Hope to get my review ready for Monday:-)

I have this one and Jane & Prudence on the TBR stacks - I'm thinking of saving them for the celebration. I'm not sure about cauliflower cheese, though.

I was hoping it was the same Prudence, but probably not. :)

Oh drat! There is a very yellowed copy of a Barbara Pym novel languishing on bookcase in my spare room. I think it may be Glass of Blessings but my daughter has a guest staying and he sleeps until noon almost every day...hmmph. Oh the frustration! Well, perhaps it can stay where it is for the time being and I will pull it out next month and join in on one of the read-alongs.

My favourite so far is No Fond Return of Love...snickered through quite a bit of that one!