My Year with Edith: The House of Mirth 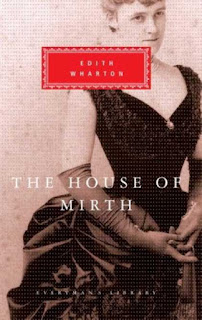 Today is Edith Wharton's 151st birthday, and I'm happy (after good intentions last year} to be immersed in reading her.

I first read The House of Mirth {and found out about Edith Wharton} in college, in a course on New York in literature, taught by R.W.B. Lewis, who had written a Pulitzer Prize-winning biography of E.W. about ten years before. So if there's a statute of limitations on when you're re-reading a book, or when you can feel like you're reading it for the first time, I think 32 years might be it. :)   In reading it just now {in the paperback I bought for the class}, I remembered the premise of the book, and what happens at the end, but I didn't remember how wonderful {funny, tragic, fresh, unheavy, readable, suspenseful, deliciously snarky} it is. I had the same feeling when I read Henry James two summers ago, and in reading Middlemarch now -- I knew it would be great literature, and that it would be good for me, but I hadn't expected to enjoy it as much as I did.

The House of Mirth is the story of Lily Bart, a beautiful woman living in turn-of the-century New York {'He had a confused sense that she must have cost a great deal to make, that a great many dull and ugly people must, in some mysterious way, have been sacrificed to produce her.'}. We know in the first few pages that she's the subject of gossip {'I've been around too long -- people are getting tired of me; they are beginning to say I ought to marry.'} We also know that she moves back and forth between weekends at country houses and an aunt's old-fashioned townhouse in New York {it was interesting to read, somewhere else, that The House of Mirth, with all its houses, was assigned reading for a class of architects}, and that she is troubled for money. We don't learn about her upbringing, and how her current situation has come about, till a few chapters later; but the pages where E.W. tells us about Lily's dazzling debut, followed by a thunder-cloud of bills,' her gentle father's financial ruin, and her mother dying 'of disgust,' are shudderingly funny.

Lily knows herself:  she is 'horribly poor, and very expensive,' and needs beautiful things and lots of money, things she can only achieve in marriage.  As things move forward, she sets her sights on, or convinces herself to accept, and finds herself losing, men who represent different aspects of society:  a timid but very wealthy book collector with an overbearing mother, a rich, social-climbing Jewish businessman, and a smart young lawyer who is part of her set but sees himself as a wry observer.

What happens is a wonderfully constructed downward spiral, economically but also (and this is more final) socially.  Lily is used by her friends, to write letters or to hold on to husbands; she makes wrong decisions, and knows that she has, and tries to rectify some of them them.  It's very interesting to see a character who is so aware of who she is and what she is doing, and yet so insistent that she was raised to think this way, that what happens as a result is not her fault {in many ways, that's true, but I found it so hard to sympathize with her}. But that's always set against the idea that she can't, or won't, rise above it, that she doesn't have the 'moral constancy' to change. There's a lot of suspense, but everything seems inevitable; it seems impossible that a happy ending could happen.

Edith Wharton began writing The House of Mirth soon after she moved into the Mount in 1902.  In the summer of 1904, her publisher asked her if she could finish it in time for it to be serialized in place of another book that had fallen through.  The serial ran from January to November, 1905 {the first installments were published before she had written the ending} -- the next installment must have been eagerly awaited -- and the book was published at the end of the year.  E.W. had already written and published poetry, many short stories, a novella, and travel articles, as well as books on interior decoration and Italian gardens. {I know all this because I've also been re-reading, and enjoying, Professor Lewis' biography; I had decided to read up to the part where The House of Mirth was published before I started reading the novel.}

The Age of Innocence is next, and I can't wait, especially since I'll be reading it, over the next few weeks, with Dolce Bellezza. Please join us if you'd like to?


Noted under: Edith Wharton, Fiction, My Year with Edith

I read The House of Mirth in college too. That was, erm, about twenty-five years ago! She and Willa Cather were the only two women authors out of twelve authors read for the class, as I recall.

Last Wharton I read was Old New York, magnificent, and Twilight Sleep, better than I was expecting. A great writer.

I would love to join you for The Age of Innocence! Do you have a reading schedule?

Happy birthday, Edith! I have yet to have the pleasure of reading one of her novels but clearly one of these days I must.

You know this is the first Edith Wharton I'll have read, inspired by you! Looking forward it The Age of Innocence together, and I see Barbara Pym in your sidebar which I'll be reading with you and others this June. Yippee!

Happy Birthday, Edith! I have enjoyed so many of her books and short stories, but have yet to read The Age of Innocence. It's near the top of my Classics Club list, but I really must finish Fall of Giants and a reread of P&P first. When do you plan on starting/discussing?

I LOVE House of Mirth. Like Ethan Frome, it's just beautiful and tragic.

And I know exactly what you mean about rereads after a long period of time. I reread Of Human Bondage last year, more than 25 years after I first read it. I barely remembered the story, so it was like reading it for the first time all over again. And it was just as wonderful.