In the days leading up to Christmas I finished reading (or listening to) three books (but two of them have been in progress for a while). They're all books that I can recommend (or 'recommend with reservations,' as they say in Cook's Illustrated, so here's a little bit on each one.

I looked for The Unlikely Pilgrimage of Harold Fry after hearing that JoAnn, and later, Marie, loved it.  Harold is a quiet, gracious, recently retired English gentleman. One day, he receives a letter from Queenie Hennessy, a woman he used to work with, and someone (we learn) he has wronged or betrayed. Queenie is in hospice with terminal cancer, and when he walks to the post office to mail the letter he has written in reply he decides, along the way, that he will walk the 500 or 600 miles to tell her that he sorry, and that if she can hold on until he reaches her, she will live. What I liked most about this book was the way it defied my expectations. It starts out with an almost fairy-tale-like quality, and quickly changes into something else, darker, sadder, at times a little silly, annoying in places. But the characters of Harold and his unhappy wife, Maureen, are beautifully drawn, and what happens to them is honest and credible, somehow.

Circle of Shadows is the fourth book in Imogen Robertson's series (set at the end of the 18th century)about Hannah Westermann and Gabriel Growther.  I read the third book {Island of Bones}earlier this fall and when I found this newest one (not yet published in the U.S.) in the university library I couldn't resist bringing it home. {I almost regret that, because it's going to be a long wait now for the next one.} But I did enjoy it!  Has anyone read these?  In this one, Hannah's sister Rachel and her new husband, Daniel Clode, are on their honeymoon, touring Europe, when Daniel is found, with his wrist slashed, next to the body of a woman who was a courtier and mistress to a powerful German duke. Other deaths follow, and Hannah, Crowther and some other recurring characters {including a castrato singer who is also a spy) are called on to investigate.  There are a lot of references in this book to what happened to the recurring characters in the first book, and I found that I'd forgotten a lot of that, so  I might borrow the audiobook of Instruments of Darkness so I can be reminded.  This is a very good series.

This is the book I'd recommend with reservations. Charles Todd's two mysteries series -- the Inspector Rutledge and Bess Crawford books -- are both set during or just after World War I, and they're both among my favorites. The Walnut Tree is described as a 'holiday tale' (which it isn't, or only marginally), and is also set during the war. Lady Elspeth MacDonald, the daughter of an aristocratic Scottish family, travels to Paris as a companion to the sister of the man she loves, and after she encounters injured soldiers when she tries to return to England, she trains as a battlefield nurse.  Her guardian would disapprove, so she signs on with the nursing service in secret, and finds herself sharing a London flat with other nurses, Bess Crawford among them. She also encounters a family friend, and is torn between the man she is promised to and this new romance.  There's a little tiny bit of a mystery, too, but it's almost an afterthought.  My reservations come in because there's just too much 'sameness' between this book and the Bess Crawford mysteries, between Bess and Elspeth, and between the quiet, serious tone of the books. I think a person could enjoy this book as well-written historical fiction (and I did, too) but as a reader of the other books, I would have liked something that complemented them better.

I hope everyone's enjoying this day after Christmas. When I found myself with some unexpected, quiet reading time on Christmas afternoon, I celebrated by reading the first few chapters {finally!} of the book I had set aside as a Christmas present to myself {the re-reading of it, not the book itself, though if I could find this new edition that everyone is reading I would buy it, just because of the dream team of the author and the introducer}. On a related note, I have one of Ngaio Marsh's Inspector Alleyn mysteries on my Ipod, and now I'm probably one of the only people on the planet who can say that they are reading two books at the same time in which a character says that another character 'went off pop.'}

But then, last night, relaxed and tired, I crawled into bed with a new edition of Emma that had caught my eye at the other library last week. Have you seen these new, almost coffee-table-book-sized, annotated editions?  I bought the first one (Pride and Prejudice) when it came out a year or two ago, and I'm trying to resist the others. I thought I would just flip through this one and read some of the footnotes, but someone (was it you, Claire?) had mentioned the connection between Emma and Christmas, and I flipped through the pages till I found the scene at the Westons' Christmas party and in the carriage on the way home.  Trouble is, I'm not sure I can stop re-reading it now, and there's really no reason why I should.  :) 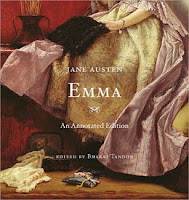 I'm really wondering where Charles Todd is going to take the Bess books, since they're almost up to the end of the war already. I haven't read the Ian books yet.

I've been thinking about how to spend my Christmas book cards, and now the Austen editions are tempting me.

It was Lisa, not me! Credit where credit it due, since that encouraged me to reread those scenes as well.

I have (so far) resisted the annotated Austen editions but I am sorely tempted by Emma.

I just know that the Bess Crawford series would be right up my street, Audrey. The last time I was at my favourite bookshop I picked up the latest title and could have stood there for ages reading one line after another. Would you advise to start at the beginning or do they stand alone?

Thanks, Claire, for the clarification -- :) -- and thanks, Lisa, for bringing me the opportunity to indulge in Emma!

Darlene, if I remember correctly there's a little romantic history that unfolds in the Bess Crawford books, but I would think that in this series, more than in some others, you could choose any one to begin with. Lisa, what do you think? I hope you enjoy them!

Oh, the annotated Emma is just gorgeous... and I did get a B&N gift card for Christmas! I am relaxing with Henry James today. After seeing The Heiress on Broadway, I just had to read Washington Square.