The Jewels of Paradise 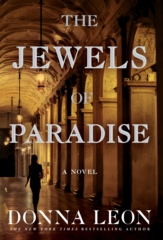 When an author has written {let me check...I'll be right back} 21 books in a mysteries series, and you've read {or even better, I think, listened to} most of them {but there are some that I missed ... yay!}, I think it's natural to be fond of the author, and want the best for them, but still feel a little possessive.  She {or he} has brought you a lot of pleasure, and deserves to be happy, even if that means moving away from the series and trying something new.  You can understand, and sympathize, and read the new book, and sometimes you can be very, very disappointed, and hope things get back to normal soon.

That has happened to me with Martha Grimes {I miss Richard Jury ... I always thought those books would be incredibly great on Masterpiece}, and with Peter Robinson {but Alan Banks will be back very soon}.  But it did not happen, not in any way, with Donna Leon's new book. In fact, I hope this will be the start of a new series, because it would be very disappointing not to follow the characters in this book.

The 'detective' in this mystery is Caterina, a musicologist in her 30s who longs to leave her dreary British university and return home to Venice.  When a colleague passes along a research project that he does not want, she doesn't hesitate to take it up.

She has been hired to study some papers in two wooden trunks belonging to Agostini Steffani, an early 18th century composer and priest and unopened since his death.  Two cousins, claiming to be his descendants, believe that they contain valuable musical scores and possibly something more, and if Caterina finds evidence that Steffani favored one branch of his family over the other, they've agreed between themselves to let the winner take all.

Caterina approaches the project professionally, with scholarly rigor, but it's inevitable that she becomes interested in knowing more about Steffani. As it turns out, he is a real historical figure; in addition to being a composer of instrumental and operatic music, he became an ambassador for the German Elector of Hanover, whose son became King George I.  {I only know this because it was mentioned in a review I read after I began listening to the book. Maybe it's a function of how I sometimes listen -- in spurts, distractedly -- to audiobooks, but I found the historical background to be a little confusing, and I almost wish I had read a little about him first. So now you can, if you want to. :) }  I'm not sure if what else Donna Leon imagines about him is historically accurate, but I'll leave those things for you to read about.

So, for Caterina, there's an element of mystery in learning about Steffani, and his role in the church, and where the wealth he may have left behind may have come from, and there's a second mystery in uncovering the truth about why she has been hired.  She is attracted to the cousins' serious, reserved lawyer, and frightened when she is followed, several times, by a quietly sinister man.  Some of the best bits in the book come when Caterina turns for help to her sister, a nun who is also a renowned historian, and to another sister's sweet but physically massive husband. There's also a wonderful scene when she is at home in her apartment, amd realizes that she has never really listened to Steffani's music. As she turns on a CD of one of his operas, she watches the family across the way, parents and two young children, eating dinner;  she has already noticed that she finds herself lonely even in her beloved Venice, and she imagines their everyday, domestic conversation and sets it to the music.

All of which you could imagine happening in a Guido Brunetti novel, with some of the details changed. There are a lot of similarities in style and tone between this book and the Brunettis. Both are set in Venice, and very evocative of it,  both are full of wit and humor, and both involve characters who are intelligent and a little bemused by the situations they find themselves in.  I think that if Donna Leon went much further away from Guido and Venice, I would still give her the benefit of the doubt, but I have to admit I'm glad she didn't.

I listened to The Jewels of Paradise as an audiobook, and as happened with the Brunettis (at least the last four or five of them), I loved reading it that way.  Donna Leon puts so much architecture and food and detail in her books that the atmosphere must come out on the printed page, but listening to some Italian, or at least an Italian accent, adds something, too.

I tried one of the Guido Brunetti novels but it didn't click with me. I've been meaning to try again, because so many readers have recommended the books. But I might try this first - I love archival mysteries!