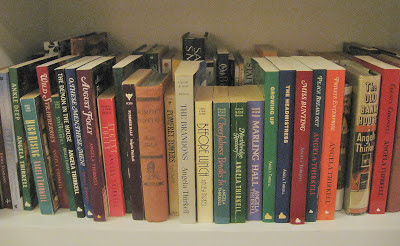 
I realize collecting is often influenced by the stages of one's life. While some of my collections have simmered down -- ... it will take an extraordinary basket now to seduce me -- I find I'm becoming possessed by new collections... For instance, I have spent afternoon after afternoon with Angela Thirkell.
Mrs. Thirkell wrote thirty-two novels, between 1933 and 1961, about English country living. And I am besotted. Frank, the lawyer, now judge, who introduced us to Thornhill, gave me her first book about a year ago, and that was it. I have been on her trail ever since. I not only want to read all her books, I want them piled by my bedside.
Witty and wonderful, they make me relax, make me laugh out loud. I now own twenty-nine of her books. Determined to own all of them, I have set up a network of scouts. Shamelessly I send lists of her books to friends everywhere, or if I know a friend is going to London ... she goes with my list in her hand. It is a passionate pursuit, and I have a remarkable bonus coming my way. Bettina, one of my best scouts, found a Thirkell book in St. Petersburg, Florida. It is a first edition, and slipped into the dust jacket is a personal letter from Mrs. Thirkell herself. I am in ecstasy.
James, a scholar at Oxford, has just received the same typewritten list because I know that university town is filled with secondhand bookstores. Though popular in her time, even coming to America to lecture at Columbia, Princeton and Yale, Mrs. Thirkell is now, alas, out of print. I must know what happens to Captain Belton and Clarissa, especially Lady Emily Leslie. The same characters are woven throughout, but each is emphasized in a different novel. Mrs. Thirkell, and that's how she preferred to be called, takes me away to another land in another time. After all, collections are meant to make you dream a little.

from Hollyhocks, Lambs and Other Passions:  a memoir of Thornhill Farm,
by Dee Hardie (1985)

I have always thought that the next best thing to having a quirky passion, one that no one else seems to share, is finding out, every once in a while, that someone does.

For instance, I love Elizabeth Bradley's modern version of Berlin-work (you know what that is, of course, don't you?) I've stitched a carpet's worth of her flowers, all sitting in a closet waiting to be put together.  When I first moved to Boston, twenty years ago this summer, I found a needlework store about an hour away that sold her canvasses and wools and even had a small version of my carpet on display.  Going there was the only time I'd come across anyone else who knew about her work, until I saw a carpet a lot like mine {except that mine will have a black background, and a red ribbon border} that was hanging in the Dovegrey Reader tent, stitched by Lynne's father.

I think about reading Angela Thirkell in the same way. I'm not sure when or how I first came across her; it might have just fortuitously finding one of her books in the library, or it might have been in the Common Reader (I know some of your remember that wonderful catalog). But it was definitely before 1985, because I remember reading this passage about her in a country-house memoir {another kind of book I once collected} and being so excited that someone else had even heard of her. {I couldn't find the page, but I think that Berlin-work is also mentioned in Dee Hardie's book.}

Of course, other people had, because when I started collecting her books myself you could still find them in used book stores, or even as new paperbacks. Eventually, I gathered at least one copy of each of her books, and in the meantime, I started reading the Barsetshire books, in order.  I never finished, and I don't know why.  I could probably figure out where I left off, but really, there's nothing for it but to start over. :)

But I still never knew anyone who had read her, until I started reading blogs.  And then there was the New York lawyer who used to write at BookishNYC, and of course Claire, and Lisa, and most recently Karen. It's always made me happy to find other readers -- maybe especially because it was so rare -- but some of her books are back in print, and I hope a lot of peple start reading her.

In case you're not familiar with her, Angela Thirkell (1890-1961) was the granddaughter of the pre-Raphaelite painter Edward Burne-Jones; she's also a cousin of Rudyard Kipling and the sister of Denis Mackail, who wrote the lovely Greenery Street.  From what I've read about her, she had two very unhappy marriages, and turned to writing to help support her children. In the 28 years between 1933 and 1961, she wrote 32 novels, 29 of which were set in Barsetshire. The books take place in the era in which they were  written, and trace the histories of a huge number of interconnected families.  {I think that there are some Grantlys and other direct descendants of Anthony Trollope's characters among them.}  The books are funny and sweet; the characters,and their descendants, weave in and out, and in most of the books someone gets engaged, someone else gets married, someone moves in or moves away, and sometimes, someone gets his or her just desserts. They're the kind of books where people draw maps of the fictional countryside and publish indexes and companions {I have one of those, too}.

My Christmas present to myself was a promise that I would finally start reading her again, beginning with High Rising, the first book in the series.  I'm about three-quarters of the way through it, and loving every page. If you can find the new Virago edition {published in the UK} or an old copy in the library, I hope you'll read it, then mention it on your blog, so I can have that happy chance of finding another Thirkell reader in you. :)
Noted under: Angela Thirkell

I know someone started me off with a copy of The Brandons (still one of my favorites), but I cannot for the life of me remember who. I went on a major collecting spree a few years ago - just when the Moyer Bell editions were still available in the stores, and I also had good luck finding some in used bookstores. I've found other readers first through listservs (many Heyer fans are also Thirkell fans), and now through blogs. Every time I read one of Claire's posts, I'm tempted to start reading whichever book she is - and I'm sure yours will have the same effect :)

I had never heard of Thirkell until I started blogging and of all new authors that blogging has brought into my life, she is ubdoubtedly my favourite. Most of the comments on my Thirkell posts are from people who have never read or even heard of her so I treasure the comments from you and Lisa and a few others who already know and love the books. Hopefully the new VMC editions will stir up more interest!

I think I am going to have to track down Hollyhocks, Lambs and Other Passions. I adore Country Life memoirs and can certainly not ignore one by a fellow Thirkell admirer!

I'm still searching for all of the Thirkells. I started with High Rising (my favorite), but all of the others I've read have been out of order. I really need to read all the ones I have in order, and find all the ones I don't have, and I hope then that I will be able to keep track of all the characters and their families a little more easily!

The Oklahoma Choctaw detective novelist Todd Downing was a great reader of Thirkell (I think he started with The Brandons too).

I thought this worth mentioning in my forthcoming book on Downing's crime writing and criticism.

Most of his novels have been reissued. Though these mostly are set in Mexico (he taught Spanish at the U. of Oklahoma), he was something of an Anglophile in his reading. Besides Thirkell, he loved English mysteries, including those by Georgette Heyer.

I'm going to be a new reader this year. I just purchased High Rising, the very beautiful new Virago version, and am looking forward to starting it.

"The books are funny and sweet; the characters,and their descendants, weave in and out, and in most of the books someone gets engaged, someone else gets married, someone moves in or moves away, and sometimes, someone gets his or her just desserts. They're the kind of books where people draw maps of the fictional countryside and publish indexes and companions "

You have convinced me! This sounds like exactly the kind of series I would love. I suppose I should place an amazon order before James' TBR Double Dog Dare begins...