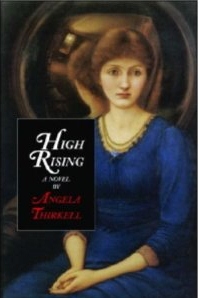 'Oh, I'm very fond of George. No, he's not an incubus, it's his secretary. Amy, she is the most peculiar woman. She seems to be a kind of blight. I believe she's awfully good at her work; and certainly she has made George stick to this book and get it done in time, which is unheard of for George, but she is bullying him horribly, though he doesn't know it. And I believe, and so does Anne Todd, that she means to marry him.'
'Would that matter?  Authors often marry secretaries, don't they? And so do lots of people.'
'No, it wouldn't always matter, but in this case it would. She's quite unsuitable, and she is taking airs as if she were mistress of the house already, and not being very kind to George's daughter, who is a darling but a clinging little sort of thing who needs perpetual kind treatment.  She's that awful jealous kind of woman who wants all the men at once. We had a very funny, but most uncomfortable evening at the Knoxes', on New Year's Eve. I took Adrian Coates there to dinner, and she tried to make a dead set at him and George at the same time. The sad part was that Adrian didn't care if she were dead or alive as he's head over ears in love with Sibyl, the daughter, and I honestly don't think George Knox would notice if any woman were alive or dead, as long as he had an audience. But that's just the danger.  He might quite easily marry her without noticing he was doing it. Then I should lose George and gain nothing, and it would be most uncomfortable for the Risings, where she is universally loathed. It's a dismal look out.'


I follow a Twitter feed that lists what are supposed to be writing jobs, but the opportunity that seems to come up most often is 'Brand Ambassador.'  These listings crack me up, because I think being a Brand Ambassador means you spritz people with perfume at the mall or hand out free samples of energy bars. But I also think that you wouldn't have to pay me to be a Brand Ambassador for Angela Thirkell, and I promise not to do anything more in this new role than tell you about her books and hope you'll enjoy them. :)

High Rising introduces us to Laura Morland, a widow in her late forties, with an 'unlamented' late husband, two grown sons and Tony, a talkative, train-obsessed eleven-year-old.  She's also a novelist, writing very successful 'good bad books' about Madame Koska, whose dressmaking salon is full of spies and intrigues. Mrs. Morland spends the winters in London and summers and holidays in High Rising, 'a pretty, unpretentious village consisting of one street, whos more imposing houses were vaguely Georgian." {High Rising is not far from Low Rising, Little Misfit, Winter Overcotes, and Winter Underclose, which would be enough to keep me reading, though apparently we don't know that we're in Barsetshire until the second book.}

When Laura collects Tony from school and drives down to High Rising for Christmas, we begin to meet some of her friends and neighbors:   besides the Knoxes, and Adrian Coates, who is Laura's publisher, and Miss Una Grey, the difficult secretary, there is Amy Birkett, the headmaster's wife; Anne Todd, who loves clothes and works as a secretary for Laura as a break from caring from her aged mother; Dr, Ford, the local general practitioner; and Stoker, Laura's formidable housekeeper.

One of things I like best about Thirkell's writing is that she gives all of her characters -- even the ones who seem like stock figures -- something of a personality and vividness of their own. There is a lot of humor and gentle wit in their encounters and their conversations, and it was wonderful to re-read this book knowing that I'll meet most of these characters again. The scenes with Miss Grey, the secretary with the 'wonky brain,' are the most amusing ones, but there is something very moving in her portrayal of Anne Todd.

'...Mrs. Morland is as kind and gentle as can be, but she has made a life of her own, and I don't think she would like at all to change it, or get on with anyone with such a boisterous personality as Mr. Knox. And I don't think he wants to marry. He would as soon think of marrying me as Mrs. Morland.'
'Perhaps he does think of marrying you. There could be stranger thoughts.'
Anne Todd laughed. 'On the strength of a few calls lately, Dr. Ford? Oh, no. Besides, I'm not that sort.'
'Which sort?'
'The sort people marry.'
'Oh,' said Dr. Ford.
There was a silence. Then he got up, and gently kicking Mrs. Todd's revolting little dog away from its place on the hearth-rug, he stood up with his back to the fire.
'Anne Todd,' he said, 'I didn't mean to say this just yet, but frankly this conversation has alarmed me. If Knox, with his delightful, overpowering personality, gets you into his clutches, it will be good-bye to all my chances.'
Anne Todd was looking at him, but said nothing.
'I suppose,' he went on, 'you haven't thought much about me, except as a middle-aged G.P., but I've thought a good deal about you.  I've seen you with that exasperating old lady, your mother, being kind and firm and considerate, putting yourself aside in every way. ... I 've admired you more than I can say.  I've thought of your future. How much money will you have, Anne Todd, when your mother dies?'
Anne Todd, in no way disturbed by this abrupt question said, 'Father's pension goes when she dies. I shall have about two pounds a week.'
'And what will you do on that?' he asked, crossly.
'The best I can. I am pretty sure of work for Mrs. Morland, as long as she goes on writing, and I shall get more work. Lord Stoke would be quite glad to have me look after the library at Castle Rising as a part-time job, and I can always write fashion articles in my spare time.'
'You aren't big enough to be so plucky,' said Dr. Ford angrily. 'And what kind of hand-to-mouth life is that going to be? A job here and a job there till you are ten years older and the younger women crowd you out. That's not good enough.' ...
'Well, I can't help it,' said Anne calmly. 'One just has to do one's best.'
'What about marriage?'
'I've told you once that I'm not the sort that gets married. It doesn't worry me.'
'But you are the sort if you wouldn't be such a blithering fool,' said Dr. Ford, so furiously that Anne looked up in astonishment. 'Haven't you noticed that I've been admiring and caring for you more and more, the more I've seen of you? Hasn't it occurred to you that a middle-aged G.P. has human feelings, that he can't watch a dear creature giving up her life and youth and not want to help? Have I got to tell you, Anne, that I love you?'
'Yes, I think you have,' said Anne. 'This is so sudden.'

As for the plot, there are four romances, three marriage proposals (not necessarily between the same people as in the romances), a gentle conspiracy to thwart another one, and even a little bit of a mystery in the form of an anonymous letter. {My Angela Thirkell dictionary says that one of the couples will be engaged for the next 28 books, but I won't say which, so as not to spoil anything for you.}

The next book in the series (The Demon in the House) is about Mrs. Morland and Tony again, and then we meet a new family, the Leslies, in Wild Strawberries, the other Angela Thirkell recently republished {in the U.K.} by Virago.

First of all, I need the Angela Thirkell dictionary right now! Can you tell me the author or editor, please? And I'm racking my brain over the engaged couple...

I do like Doctor Ford, and
(spoiler alert)
I think he's still a bachelor at the end of the series, isn't he?

I had forgotten this is a Christmas book. Now I'm really tempted to ignore the packing I must do & take this off the shelf.

Oh, and I'd love to read one of Mrs Morland's good-bad books!

I'll be placing an order with amazon very soon ;-)

Hi, Lisa:
The book I have is called Going to Barsetshire: a companion to the Barsetshire novels of Angela Thirkell, by Cynthia Snowden. (I was going to refer to it as 'my Angela Thirkell companion' but I thought people might think I was talking about you or Claire1) I think there's another similar book out there, and if you google the Angela Thirkell Society, one of them (either the UK one or the US one) has an online version.

This is such a great book! I love Laura Morland and her approach to writing. And marriage. And I really need that Going to Barsetshire book.

Lovely, lovely, lovely post! Like Lisa, my inner detective is pondering the lengthy engagement. I know Doctor Ford's romance from The Demon in the House takes a few decades to be resolved but I can't for the life of me remember what was left dangling here!

Oh, no! I misread my Thirkell companion... I should just read the books instead. Claire amd Lisa are (of course) right.