Virginia Woolf, a reader completely alive to Austen's fictional intelligence, said that 'of all great writers she is most difficult to catch in the act of greatness'. Woolf meant that is was nearly impossible to take a single scene, or single paragraph, as an epitome of that greatness. The apparent modesty of Austen's dramas is, though, only apparent. Look closely, and the minute interconnectedness of her novels is a bravura achievement. This interconnectedness is the reason why, when you re-read her novels,  you have the experience of suddenly noticing some crucial detail that you have never noticed before, and realising how demanding she is of your attention. One of the special delights of reading Jane Austen is becoming as clever and discerning as the author herself, at least for as long as one is reading. And when you do notice things it is as if Austen is setting puzzles, or inviting you to notice little tricks, which do justice to the small, important complications of life.
Little things matter, not because Austen's interests are trivial, but because the smallest of details -- a word, a blush, a little conversational stumble -- reveal people's schemes and desires. Austen developed techniques that rendered characters' hidden motives, including motives that were hidden from the characters themselves, and gave the novel reader new opportunities to discern these from slight clues of dialogue and narrative. The talk of Austen's 'miniature' art should not be a way of shrinking her achievement, but of drawing attention to its beautiful, exacting precision...

Because John Mullan, the English professor who wrote What Matters in Jane Austen:  Twenty Crucial Puzzles Solved, writes about her with so much unabashed admiration, I love being able to tell you about his book with the same feeling.  I enjoyed reading it so much {I know a lot of other readers have, too}, and I already know that I'll want to re-read it. The trouble is that now I want to re-read all six novels, too ... but the saving grace is that I would probably want to do both things at once. :) 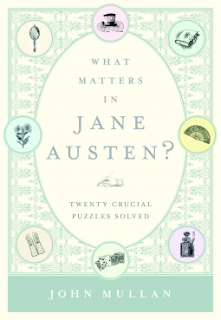 Each of the 20 chapters in the book asks and answers a question (for example, 'Is It Risky to Go to the Seaside?' or 'Which Important Characters Never Speak in the Novels?' or 'What Do Characters Read?') and then explores how Jane Austen used these things in her writing. Through lots of quotations and examples, you learn that they matter, and why they do. For example, in no. 12, 'What Do Characters Say When the Heroine Is Not There?', Mullan notices what Austen does in telling us about Charlotte Lucas' engagement.

In the embarrassing wake of Elizabeth's rejection of Mr. Collins's proposal, her best friend has taken on the burden of conversing with him. Elizabeth is grateful to Charlotte, but [Charlotte] is not exactly being selfless.  'Charlotte's kindness extended farther than Elizabeth had any conception of; -- its object was nothing else than to secure her from any return of Mr. Collins's addresses, by engaging them towards herself'. She knows her game.  Suitably encouraged, Mr. Collins is soon hastening over to Lucas Lodge to make his offer, and as he does so the narrative switches its attention to Charlotte and leaves the unsuspecting Elizabeth behind. There is Charlotte, expectant, watching for her suitor 'from an upper window' and setting out 'to meet him accidentally in the lane.'  ... Austen has decided to let us see the world from Charlotte's point of view. Elizabeth's absence is emphasised by her friend's one reason for feeling some discomfort: 'The least agreeable circumstance in the business was the surprise it must occasion to Elizabeth Bennet.'
Austen's heroines are vivid to us because her novels are narrated from their points of view and suffused by their consciousness. Yet one of Austen's devices is to leave her heroine behind,  to give us a glimpse of what the world is like in her absence.  In all her novels except Mansfield Park this is done only occasionally, so that we receive a peculiar jolt when it happens. Charlotte Lucas's encounter in the lane with Mr. Collins is only the third scene in Pride and Prejudice where Elizabeth is left behind. ...


I remembered,, more on the surface, Charlotte saying that she was 'not romantic,' without having noticed what else Austen did to depict the differences between the two women.  {In another chapter, Mullan points out that Jane Austen specifically tells us that Charlotte is 27, and so much older and less marriageable than the Bennet sisters; another layer in 'a chasteningly unsentimental picture of the compromises that an intelligent woman has to make for material reasons.'}

I think that what I liked best about this book -- besides its subject, about whom I would read almost everything -- is that it's very readable.  It's a book that you can dip into and out of.  It's not superficial -- I now know what an 'idiolect' is (and that Jane Austen created them}. I think you might have to have read all the novels first, even if that means that you notice all the things that you never noticed.

What Really Matters in Jane Austen? will be published in the U.S. in January.  I'm sure that this book will be on any list of my favorite reading this year. I'm grateful to Bloomsbury Publishing for letting me read it in advance, via NetGalley, because it went on my reading list the second I heard about it. :)

I love that quote from Virginia Woolf! I'm resigned to putting this book on my Christmas list and getting a belated present :) I keep seeing references to the chapter about the risks of going to the seaside, and I want to know the answer!

I love this review, just as I love everything I have heard about this book. I know I am going to love it!

If my library doesn't have a copy of this showing up as 'on order' and soon then I will just have to give them the push.

Can you imagine the luck of having Mullan as your English professor? I listen to loads of podcasts while out walking my dog and it's always a good day when he is a guest on one show or another.

I'm adding to my wish list again - this is a book I definitely NEED to own! Great review, AUdrey.