Paris in July {during My Year with Edith): 'The Last Asset'


Garnett, if he thought of the matter at all, had concluded that divorce must long since have eliminated Mr. Newell; but he now saw how he had underrated his friend's faculty for using up the waste material of life.  She had always struck him as the most extravagant of women, yet it turned out by the miracle of thrift she had for years kept a superfluous husband on the chance that he might someday be useful.


Paul Garnett, a young American journalist, is the " 'London corrrespondent' (with an occasional side glance at Paris)" for a New York newspaper. When his editor assigns him to write a regular series of 'Talks with Smart Americans in London,' his first interview is with Mrs. Sam Newell, a woman with 'waning fortunes' who keeps herself and her daughter by staying with wealthy friends.  Garnett is fascinated, and a little repulsed, by Mrs. Newell:

Her appearance was brilliantly fresh, with the inveterate freshness of the toilet table; her paint was an impenetrable as armor. But her personality was a little tarnished; she was in want of social renovation. She had been doing and saying the same things for too long a time. London, Cowes, Hamburg, Scotland, Monte Carlo -- that had been the round since Hermy was a baby.

Hermy (Miss Hermione Newell) is her handsome but dull daughter; 'unoticeableness was the most conspicuous thing about her.'  When Mrs Newell summons Garnet to the Ritz ('We came over with the Woolsey Hubbards (you've heard of them, of course? -- they're from Detroit), and really they do things very decently. ... This salon is a part of their suite, I simply could not have afforded it myself.'), he is amazed to learn that Hermione is going to marry a young French count.

...Regardless of its unflattering implications, Garnett prolonged his stare of amazement till Mrs. Newell somewhat sharply exclaimed -- 'Well, didn't I always tell you that she'd marry a Frenchman?'
Garnett, in spite of himself, smiled at this revised version of his hostess' frequent assertion that Hermione was too goody-goody to take in England, but that with her little dowdy air she might very well 'go off' in the Faubourg if only a dot could be raked up -- and the recollection flashed a new light on the versatility of Mrs. Newell's genius.
'But how did you do it - ?' was on the tip of his tongue; and he had barely time to give the query the more conventional turn of:  'How did it happen?'

Mrs. Newell has received a small legacy from an aunt (though Garnett begins to suspect otherwise) to use as a dowry, and Hermione has converted to Catholicism ('Already?'  Mrs. Newell stared. 'It doesn't take long. And it suits Hermy exactly - she can go to church so much oftener.')  She just wants Garnett 'to remove the last obstacle to its being fixed' -- she needs him to find Hermione's father, who lives in Paris, because the Count's aristocratic family will withdraw their consent if he does not stand up with his daughter.

I'm a little (more than a little) oversubscribed this month, with work and family and too many library books and packing and moving and Paris in July all at once, but I found myself thinking this afternoon that I really would have more time for reading if I didn't spend so much time doing other things {searching for a new pearl gray bathmat, for example...it's just that the paint color I finally chose -- that was hard! -- is so pretty).  A short story, at least.  It was so nice to be only 8 or 10 pages into this {obviously quotable} one and find so much Edith Whartonish humor and snarky social commentary.

Garnett plans to turn her down, but he changes his mind when he sees that Miss Newell and the Count are truly in love. He also suspects that Mrs. Newell and her friend the Baron {Garnett suspects him of being the real source of Hermione's dowry) see the marriage only as a chance, 'a forlorn hope on both sides,' to regain their place in society.  There's a resemblance, in their desperation, to other Edith Wharton characters:

How much she had wanted this particular thing was shown by the way in which, on the last day, when all peril was over, she bloomed out in renovated splendor. It gave Garnett a shivering sense of the ugliness of the alternative which had confronted her.

As it turns out, Garnett has met Mr. Newell before, unknowingly.  He is in 'unsubdued wonder' at this, but even more stricken by Hermione's reaction when he tells her that her father has not consented, but will think it over. All of the characters, even in a short story, are so deeply drawn, and again, reading this story left me wanting to read more of EW's work. 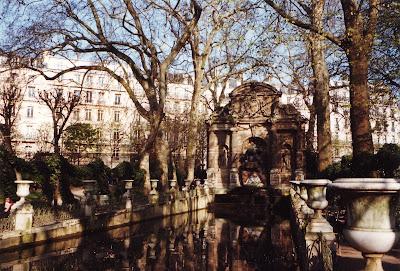 'The Last Asset' is an early story, published in 1904. The Count's old French family, and Paris itself, are more part of the setting than crucial to the story, but we do get to spend time in a cafe, and at the Ritz, and in a narrow street in a more rundown Paris neighborhood, and in the Luxembourg Gardens ( '...and if you have no objection, I prefer not to break through my habit of feeding the sparrows. We are five minutes late as it is.')


{The painting is Young Woman in Mauve, by Berthe Morisot, found here. The photo of the
Luxembourg Gardens is from my last (and almost-only) trip to Paris.}

Noted under: Edith Wharton, My Year with Edith, Paris in July, Short Stories

What a lovely sounding read, I like short stories on holiday. Hope your new bath mat is perfect!

The photo of the Luxembourg Gardens is lovely! I did not manage to visit the Gardens during my last (and also only) trip to Paris, but will make sure I do this time.
I have been meaning to read Edith Wharton's works for some time now, but somehow have not gotten around to it. Reading your post has renewed the spark of interest. :)