Should he or shouldn't he? Need I or needn't I? {The Warden} 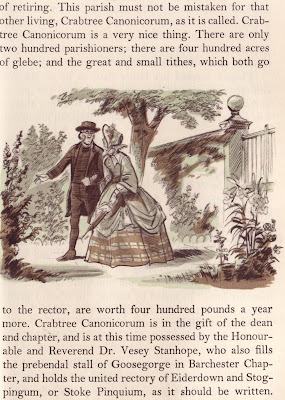 Although I haven't really looked at the Facebook page where it is all happening {am on Facebook; wouldn't mind if Facebook went away; but the Trollope Society is trying to be current, and so I guess am I}, I was inspired by the Trollope Society's August reading event, Take a Trollope on Holiday, to finally start reading the rest of the Barchester novels. I read The Small House at Allington about twelve years ago and remember loving it  {there's a wonderful line in it about being forty if you're going to be forty, and it resonated with me at the time :)}, and as it turns out, I've read The Warden once, already, too. I thought I must have, because the story was so familiar, more familiar than it would have been if I had just read about it.

I just re-read it, then, in an edition {from the library} published in 1955 to mark the book's centennial, and with an introduction by Angela Thirkell! I loved reading that part (and even though I have a paperback edition of my own, I'm off to the library later to look for the matching edition of Barchester Towers.) B.T. is actually the recommended book for the reading event, but I saw something, somewhere, that said that you really should read The Warden first, to meet the characters and learn the story from the beginning.  But then, Angela {very diplomatically} says otherwise:

For beginners in Trollope it might possibly be wiser to begin with Barchester Towers -- and here, not for the first nor the last time, we must divagate, to remark that if Barchester is Salisbury it cannot have towers, nor can it, standing alone and exquisite as it does, have the elms which are mentioned as an ornament of the close -- for it flings one in media res with a vengeance.  Nor is an acquaintance with The Warden absolutely necessary, for Trollope is careful to give a brief account of the earlier life of the characters whom we meet again -- some of them peculiarly changed {she's very funny in this introduction about the 'continuity' mistakes Trollope makes in his novels, and she makes in hers}. But for old Trollopians there is a certain quiet and almost self-denying pleasure in reading, for the nth time, the early chapters of The Warden, which do little but set the scene for the action, so tuning oneself to the leisurely narrative that leads us to the great Barchester Towers.

{Isn't that the best description of book-geekery that you've ever read?}

She more or less comes out and says that it's not a great book {I think I agree}, but there's definitely a certain quiet and not-all-that-self-denying pleasure in reading it {especially when you know there's something much better to come!}  The Warden introduces Septimus Harding, the sweet, cello-playing, earnest warden of Hiram's Hospital, an almshouse for twelve old men attached to the cathedral; his daughter Eleanor; Dr. Grantly, the current bishop;  Dr. Theophilus Grantly, the Archdeacon (the bishop's son, and married to Mr. Harding's other daughter, Susan), Mary Bold, a friend of Eleanor's, and her brother John Bold, a young surgeon who is also an ardent reformer (and in love with Eleanor).  In his reforming zeal, Bold questions whether the Church is following the provisions of the will that endowed the Hospital, especially since Mr. Harding receives a great income and the inmates are given only a small daily stipend.  His investigation leads to a lawsuit, a public airing of the issue in the detested Jupiter, and a promise exacted by Eleanor that he will give up the cause and that she will marry him.  But Mr. Harding's earnestness and moral fiber lead him to insist that he must resign the wardenship, on principle.

Along the way, there's funny satire on church politics, and clergymen, and the press, and very warm, affectionate {if that's the word I mean} portrayals of all the characters. {I think my favorite part was when Mr. Harding decides that he must spend a whole day roaming through London to escape from the Archdeacon.} I learned from Angela Thirkell's introduction that it's the Grantlys who are the principal continuing characters in the books, and {though he's not a bad man} that John Bold will, happily, die off very soon, 'probably to his creator's relief and certainly to ours. That is one of the advantages that fiction has over life.'  I'm sorry; I know that's a spoiler, but it doesn't seem to be one to care about. {Although I usually try not to do this till after I read the book(s), I just watched the BBC adaptation -- Alan Rickman! -- and John Bold is just not there any more after the first or second installment. Eleanor and Mary are wearing black, but there's a long time before the writers remember to mention why. I liked that.}

And now I'll have time, I think, to read Barchester Towers ... and to think about how I can use the word 'divagate' in some future post.


{illustration from the edition I read, The Centenary Edition, Heritage Press, 1955}

I'm halfway through Barchester Towers and I don't think I would have wanted to read it without reading The Warden first. So much is explained in that first book. And it's so lovely, once you've ploughed through the first couple of chapters. So looking forward to reading the rest of the books. My first taste of Trollope and I'm loving him.

Trollope was a new discovery for me last year and I've been slowly working my way through the Barsetshire series, beginning with The Warden, which I loved. I'm in the middle of the fourth book, Framley Parsonage, at the moment and although it's not completely necessary, I would recommend reading the series in the correct order as there are quite a few recurring characters.

I love the idea of taking a Trollope on holiday - I had not heard of The Small House at Allington and its title is calling to me (I know that's not a proper reason to read a book but it's stiking a chord). I'll look out for that line on being forty.

My first Trollope book was a paperback double edition of The Warden and Barchester Towers, so I've always thought of them together. I'd love to read Thirkell's introductions!

I did read The Warden first and thought it took forever to get going; however, I'd first read The Way We Live Now which also took a bit to warm up, so I stuck with it. It got better, but it isn't nearly as good as BT!! I too need to finish the series -- I have so many other Trollopes on my TBR shelf, but I can't justify starting any of them while Dr. Thorne remains unread.