The Archaeology of Home 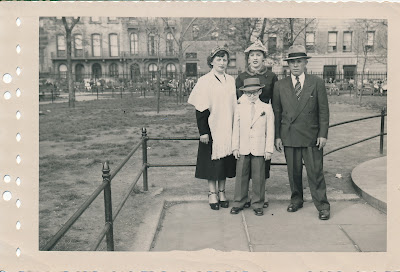 Place is a kind of parentage. There is a kinship of place, an alternative genealogy, where instead of sharing the stuff of the body itself, we share the environment each of us, in successive generations, has literally incorporated. The winter sun dropping below the tenement roofs burned down, in a similar pattern, in my eyes and in the eyes of a grocer's daughter, Isadore, who was twelve at the dawn of the Civil War. The stretch of sidewalk from stoop to Avenue C offered the same counterpressure to the legs of a slight man named Simon in 1907 as it did to my daughter's nearly a century later. The feel of the stoop's iron railing was in his hands, now long in the dust, and in his son's hands.

It seems a little funny to be writing here about a book that might not be of general interest...or even one that I would {normally} read. I don't remember where I first heard about Katharine Greider's The Archaeology of Home:  an epic set on  thousand square feet of the Lower East Side, maybe on NPR?, but I put it on my library reserve list because it was about a house, and more than that, a house very close to the neighborhood where my parents grew up and my grandmother lived until almost the end of her long life. Even so, it sat in a pile of books, unread, unopened, until last weekend, when it was almost too late to read it before it was due back. I decided I'd read a little to see if I'd want to borrow it again, then I kept going, and then I was glad I did.

Katharine Greider and her husband, both writers, use some of their million dollars (made from successful stock market investments) to buy two apartments in a four-story walk-up on East 7th Street, between Avenues C and D, in New York City, the first building built on the site as the city grew. Their block is midway between Tompkins Square Park and the East River. That's about four blocks from where my mother grew up (on St. Mark's Place), and my grandmother lived (on East 9th Street, between Avenue A and First Avenue), and equally near where my father lived as a child (on East 5th Street, next to the police station that was always shown in the opening credits for Kojak and now for Castle).  My grandmother would take us to Tompkins Square Park when we were little (before it was unsafe, and before it was rescued), and after my great-aunt's death, my parents, my uncle and their cousin inherited and briefly owned the building my grandmother lived in -- a four or five-story brick walk-up, with narrow, uneven stairs, the bathtub in the kitchen, the world's tiniest bathroom (and the door in the hallway where the shared bathroom used to be), and the tall stoop with a wrought iron railing.  Even though I don't think we ever ventured to the other side of the park (where this book is set) I imagine the streets and the house being very similar in feeling to the ones she knew, and my parents knew, and we knew a little.

This book is more academic and wide-ranging than the sweet domestic memoirs I'm sometimes drawn to, or the food-filled ones, and that might be because it starts with a domestic horror story. After consulting an architect to plan a series of repairs to the building, which was built as a real estate investment in the 1840s, Katharine receives a terrifying phone call one Friday night.

The situation, he told me, was more serious than we had supposed. Indeed, the foundation of the building in which my children and I were even now settling down for another night's rest was in what professionals called a failed condition, its crushed and rotted wooden beams propped up by crumbling brick piles and two-by-fours...Ralph said he would wait until Monday morning before reporting this hazard to the City of New York, at which time city officials would almost certainly seal the building. And he left no doubt as to what we should do over the weekend:  Get the hell out.

After that opening, there is a lot going on in this book. There's the story of how the couple decide whether to rebuild or to go, and how they deal with their odd co-owners. There's a little {I wanted more} about the building itself.  Mostly, and this was what kept me reading, the crumbling of her 150-year-old house starts Katharine on a project to research the history, archaeology, anthropology and sociology of the land under it, the house itself, and the people and families who lived there, from the native Americans settling on good salt marsh land, to the wealthy English loyalist with a mansion on the tip of Manhattan and farmlands further up, who forfeits his properties when he flees after the Revolutionary War, to the builders and cartman who first live on the street, to the German, then Jewish immigrant families who live there later. The amount of detail that she is able to pull together, from city records and many other sources, is fascinating. The different elements of the book (the crisis with the house, the historical research, the contemporary observations about city living - some of which resonated with me, a fairly recent city dweller) are all jumbled together, which seems a little disjointed but also helps to keep the book moving (at least it did for me).

There's a little bit of nostalgia here {I think some of my brothers and sisters are feeling it too) about the place where our family is from, and even though it's a slightly different history, it's not all that far from ours, and it was very compelling, and moving, to read about it.  Is there a book about your history that accomplished this for you?


{My mother, my grandparents and my uncle in Tompkins Square Park, c. 1953}

As the eldest I am the current minder of our family Bible which dates back to the 1800s. I love looking at the tidbits of flowers pressed between some pages, ticket stubs or newspaper clippings hidden inside.

That is a super photograph!