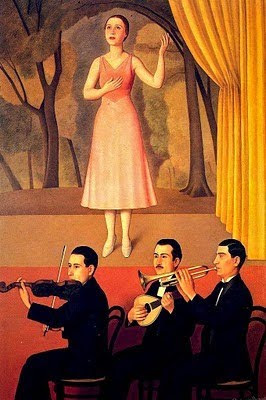 One of my favorite reading pleasures comes from reading reviews, lists of new books, and blogs, and finding unusual, enticing books to look for. Even more than that, I love that even when a book discovered that way seems long forgotten, I can go to either one of the two public library systems I belong to with a very good chance of finding it. (My hit rate, or I should say their hit rate, is incredibly high.)

I know many other readers like the dusty back stacks of their libraries as much as I do, and it's thanks to one of them that I found this book. It's a 1948 novel by A.A. Milne, who (did you know this? I didn't) wrote as many books for adults as he did for children. I thought it would be vintage and light and silly and undemanding (that's what I was in the mood for when I finally read it...if I borrow an old book, and no one else is waiting for it, I can sometimes hang on to it for almost three months).  It was all these things, especially at the beginning, enough so that I wasn't sure it would hold my interest for more than the first 30 adorable pages or so. But I'm very glad it did.

Our heroine is a society girl about town, tall, dark, very beautiful, and 28 (or 30? or 35?). She lives in a tiny flat with her faithful maid, Ellen, and strings along a string of suitors (at least eight, unless I missed one).

'When do we meet again, sweetie?'
'When you like,' said Barnaby. 'Couldn't we have a day in the country together?'
'What about the stuffy old office?'
'I'm taking a week's holiday next week. To fit in with some of these family men.'
'Darling! how exciting! Why didn't you tell me? Where are you going?'
'I'm waiting for you to say. Is next Thursday all right?'
'Don't be silly, ducky. Aren't you going away properly?'
'No, I'd go away properly, if you'd come. We'd go to Brittany. I know a village.'
Again that quick look, that quick intimate smile. But different. No one had ever had it. Except-- Well what did it matter anyway?
Chloe sighed and put on her gloves.
'Why don't we?' she asked.
'God knows.'
'I don't love you enough, my darling.'
'So I suppose.'
'You wouldn't like it if I wasn't really loving you.'
'Yes, I should.'
She laughed happily.
'Oh, darling, I'm so glad you said that. I should have hated you if you'd gone all Tennyson suddenly.'
'Try hating me for a change. Anything to be different from the others, As a matter of fact, I shouldn't like it.' ...
'All right, darling. And we'll go to Brittany one day.'
'We will.'
'I absolutely promise.'
'So do I. I may be ninety at the time, but I'll make the crossing somehow.'
'We'll come on deck in our Bath chairs, and have them side by side.'
'I hope it will be calm. It wants to be calm for Bath chairs.'
'They've got brakes they put on them now so that they don't roll backwards sown the Leas at Folkestone. They used to lose a lot of old ladies at one time.'
'I'll enquire into all that,' said Barnaby.
'Oh darling, I do love you,' cried Chloe, and it sounded to him like a sudden cry from the heart, but meaning, 'Oh darling, I wish I loved you!'

Chloe has her deeper moments, and possibly her secrets, but she is essentially a foil for her suitors (the pompous one, the painter who is too young, the married Duke of St. Ives, the Vicar, the fatherly Baronet, the literate, intelligent Barnaby, the shadowy one who we never meet, and the one I might be missing). The book becomes better {happier, sadder, more moving, less of the same} as as their lives brush against hers and change or turn away.

For all the lightness and sparkle, there's more here than that, some depth and some aching sweetness:

It was true that, of they were yours when they were alive, that when they died you kept them forever. Somebody had written that to him when Jonathan was killed, and he had laughed bitterly, and put a notice in The Times, thanking the many kind friends for their expressions of sympathy, and hoping to answer their letters personally in due course. But he had not answered; there was nothing to say. Now he realized that it was true. Jonathan, if he had lived, would have been grown-up by this time; any expression of love between them  would have been bad form., even if there was love left to express. They would meet rarely, write as little as possible. He would dislike his daughter-in-law, or she him. ... But now Jonathan had stayed unchanged, through all these years, and still sometimes in the summer, when he walked down through the rolling wooded land to the edge of the sea, Jonathan's hand would be in his, and he would remember, not sadly now, happily, their first swim together.
'It is easier in the sea, isn't it?'
'Much easier.'
'It's because of the salt holding you up, and the salter it is, the easier it is.' An anxious little pause, and then:  'Is the sea very salt just here?'
'Very. People often make remarks about it.'  ...
On this late October morning, while waiting for Chloe to come out, Jonathan had lived again for a moment, and brought him peace. Just as Barnaby had known on that morning in her bedroom, so Everard had known yesterday, with a certainty based on no admissible evidence, that Chloe would never be his. What she had said, what she had not said,driving in the car, had told him. She was lovely to look at, lovely to talk to, but she was not for him; not, perhaps, for any man. From now on he was her guardian, her uncle, her adopted father. Chloe and Jonathan, his two children., He must think of her like that, if he thought of her at all. Better not to think about her.

A.A. Milne adopted a very interesting way of drawing the title character, which takes the book out of the ordinary.  In my library copy of the book (actually from 1948), someone cut out some text from the book jacket and pasted it onto the endpapers. This part was as good as the book:

This is how the Author describes his book:
A portrait of a gay, young woman in a year between the wars, done from the outside, so that the reader must form his own judgment of her: as do her friends in the book, and all of us of each other in real life. Of her friends the reader will learn something from the inside, which may enable him to know them better, and so to see Chloe more clearly through their eyes. If, in the end, she still remains something of a mystery, he should not be surprised:  for every human being is a mystery, and nobody knows the truth about anybody else.  This, however, does not prevent us from enjoying the company of a beautiful woman and the conversation of an amusing friend, whenever such is to be found.

All in all, a happy find, and more than I expected.

Lovely post. I'm so sorry I missed it when you initially posted it, but thanks for letting me know! :) I'm so glad you liked this and now I will certainly bring it home again. I've pulled it off the shelves at work at least twice now and it has sat on my desk. I want to read every book in my lost in the stacks list, but I am such a slow reader I can't keep up. Part of the reason I want to do these posts is to check them out and keep them circulating so they Stay on the shelves. I love the cover by the way--my library removes all the dustjackets so it is just plain old boards. Even if she is a socialite I like the sound of Chloe. It sounds as though your library has a great collection too--is it a public or university library?