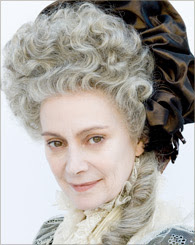 As I wrote a few weeks ago, the writers who created the wonderful BBC adaptation of Cranford added some plotlines, and many characters, that weren’t in that novel. Some of these were borrowed from two other serial novels that Mrs. Gaskell wrote, before and after Cranford. {I’m learning all this from Jenny Uglow’s biography, Elizabeth Gaskell: A Habit of Stories, which I am still reading and greatly enjoying. I have a system, all of a sudden: I’ve been reading the biography up to the point where Mrs. G. writes a new book, then stopping sometimes to read the book. I read Cranford and The Moorland Cottage before I started the biography, but this accidental approach has brought me, so far, to 'Mr. Harrison’s Confessions,' North and South, and 'My Lady Ludlow.' I hope to get to Cousin Phillis and Wives and Daughters, as well as finishing the biography, before the Gaskell Reading Challenge ends later this month. I’ve never followed this ‘system’ before, but it adds something — context, social/literary history, a feeling of knowing the author a little more immediately — that I really like.}

Sorry, I’m rambling (but, then again, so do these novels…). The BBC writers took Dr. Harrison, Mrs. Rose, the Hutton family, the Tomkinson sisters, and their love triangle (quadrangle?) from 'Mr. Harrison’s Confessions' (published two years before Cranford), and Lady Ludlow, her land agent Mr. Carter (originally named Mr. Horner), Harry Gregson and Miss Galindo from 'My Lady Ludlow,' written five years later. This serial was written quickly, after North and South and The Life of Charlotte Bronte, when Mrs. Gaskell wanted to earn money to take her daughters abroad after a romantic crisis. Her daughter Meta had become engaged to a Captain Hill, a widower with two children, after meeting him on board ship during an earlier trip to France and Italy. Captain Hill was sent to India when conflict erupted there in the summer of 1857. After hearing rumors of ‘untruthfulness to a small degree in regard to money matters,’ Meta wrote to him for reassurance; when he didn’t respond, she finally broke off the engagement.

Sorry again, rambling again, but the story behind 'My Lady Ludlow' is almost as interesting as the story in it. The story is presented as the recollections of Margaret, one of the half-dozen or so young gentlewomen (‘all of condition, though out of means’) who are ‘entertained’ at Hanbury Court by Lady Ludlow, the widowed countess (none of this is central to the plot, except as a way to demonstrate Lady Ludlow’s kindness after Margaret is crippled in a fall). As we saw her in the BBC Cranford, Lady Ludlow is the mother of nine children, only one of whom has survived; she is convinced of the importance of aristocracy and heritage, set against change, and able to respond in kind to the goodness that she finds in others.

She has been maid of honor to Queen Charlotte’ a Hanbury of that old stock that flourished in the days of the Plantagenets, and heiress of all the land that remained to the family, of the great estates which had once stretched into four separate counties. Hanbury Court was hers by right. She had married Lord Ludlow, and had lived for many years at his various seats, and away from her ancestral home. She had lost all her children but one, and most of them had died at these houses of Lord Ludlow’s; and, I dare say, that gave my lady a distaste to the places, and a longing to come back to Hanbury Court, where she had been so happy as a girl. I imagine her girlhood had been the happiest time of her life; for, now I think of it, most of her opinions, when I knew her in later life, were singular enough then, but has been universally prevalent fifty years before. For instance, when I lived at Hanbury Court, the cry for education was beginning to come up; Mr. Raikes had set up his Sunday Schools; and some clergymen were all for teaching writing and arithmetic, as well as reading. My lady would have none of this; it was levelling and revolutionary, she said.

It was interesting to read 'My Lady Ludlow' knowing that it was written quickly, to earn money, and as a magazine serial, because that let me see why parts of it were very good, with well-drawn characters and a lot of wit, while the whole middle section (a long but unrelated story about aristocrats escaping after the French Revolution – fashionable then, like vampires now?) made my eyes glaze over. But Miss Galindo, who enters the story after this, is worth waiting for. As in the BBC Cranford, she’s a distressed gentlewoman who must earn her living; she’s outspoken and unconventional, but funnier, a little less polished, older ('not fifty till next May'), and less eligible for romance, in the novel.

When they heard of the old love-story between the dead man and Miss Galindo…they tried to remember Miss Galindo’s speeches and ways of going on during this visit. She was a little pale, a little silent; her eyes were sometimes swollen, and her nose red; but she was at an age when such appearances are generally attributed to a bad cold in the head, rather than to any more sentimental reason. They felt towards her as towards an old friend, a kindly, useful, eccentric old maid. She did not expect more, or wish them to remember that she might once have had other hopes, and more youthful feelings.

Even though 'My Lady Ludlow' is a little disjointed and uneven, it has Mrs. Gaskell's well-drawn characters and her lively, perceptive wit. And again, what happens in the BBC Cranford isn’t exactly what happens here, but it’s easy to see why merging these three novels into one story could work so well.

That does sound link an interesting approach. Do you find it hard, though, keeping the biography straight, switching back & forth? I'm reading a Penguin edition of her "Gothic Tales" - I'd have to check where they fit in the timeline of her life.

I also ended up skimming the middle section about the French Revolution, which I found to be a complete snooze. I think it was so clever how the creators of the miniseries were able to interweave all the different stories about Cranford.

I love your approach to reading the biography as well! I've been putting off some literary biographies including both Gaskell and Dickens, until I've finished all the novels, for fear of spoilers. I'm sure it would add so much insight but I hate knowing the endings when I'm reading a book!

Great post. I dipped into the Uglow biog, but didn't read it cover to cover, I should because I'd like to learn more about Gaskell's relationships with her daughters. I read Cranford for the first time a couple of years ago and I was completely besotted by it. I hadn't been prepared for her humour - a wonderful book.