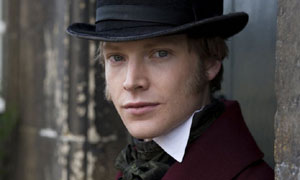 I remember reading that the TV production of Cranford drew some of its plot lines and characters from two (other) novellas by Elizabeth Gaskell -- this one, which I just read, and 'My Lady Ludlow,' which I haven't yet.

It’s easy to see why Cranford and ‘Mr. Harrison’s Confessions’ would fit together, and in reading the Jenny Uglow biography, I’ve learned more about them. Soon after she wrote her first novel, Mrs. Gaskell wrote ‘The Last Generation in England,’ a piece that she described as a ''history of domestic life.'

In recording her recollections of the town of '--' she promised that 'every circumstance and occurrence ... is strictly and truthfully told without exaggeration', set down just as it arose in her memory. The unnamed town is unmistakably Knutsford [the town where Elizabeth was taken, as a baby, to live with her aunt after the death of her mother], and the semi-comic account of the town's intricately hierarchical, predominantly female society takes us one step toward Cranford.

A year or two later, she began publishing short stories in Household Words, a new magazine edited by Charles Dickens. ‘Mr. Harrison's Confessions’ was published in January, 1851; in December, 1851, she sent Dickens 'Our Life at Cranford.' Mrs. Gaskell said in a letter that she 'never meant to write more, so killed Capt Brown very much against [her] will' ... but, happily, she went to write ten more Cranford stories during the next two years, combining them later into book form. There's a very funny story in the biography about the death of Captain Brown. He dies saving a child who has fallen on the train tracks, but Miss Jenkyns, who disapproves of Dickens, hears that he was hit by the train while he was reading The Pickwick Papers. Dickens changed this detail without consulting with her, possibly because he didn't want to plug his own book in his magazine. Mrs. Gaskell  objected, but Dickens wrote back 'in great haste' to tell her that her letter was brought to him 'in utmost consternation' at 4 o'clock., when it was too late to undo the change.


He would do anything (he said) rather than cause her a moment's vexation, and signed himself 'the unfortunate but innocent, Charles Dickens.'

In 'Mr. Harrison's Confessions,' the narrator {Mr. Harrison} is the town’s new young doctor, who is soon facing fatherly advice from the town’s old doctor; gossipy insinuations from Miss Horsman, a ‘maiden lady’ with a ‘disagreeable’ and ‘knowing’ smile; matchmaking from the pushy Mrs. Bullock, on behalf of her unwilling stepdaughter; silliness from the ‘simpering’ and ‘affected’ Caroline Tomkinson; ‘snubbings’ from her fierce and protective older sister (‘It might be so, but she confessed she had more confidence in medicines that had some effect’); teasing (and forgery) from his friend Jack Marshland; and stirrings from his housekeeper, Mrs. Rose. But he only has eyes for Sophy, the vicar’s ‘good and sweet and pretty’ daughter.

One of these entanglements is quickly resolved:


Miss Bullock and I, meanwhile, became rather friendly. We found out that we mutually disliked each other, and were contented with the discovery.  If people are worth anything, this sort of non-liking is a very beginning of friendship.

But the townspeople, of course, still insist that he is engaged to one lady while trifling with the affections of two or three others. The untangling all happens with a lot of humor; even some of the dramatic or more serious parts of the story are tinged with it.

I told Mr. Bullock, I really thought we might avoid the amputation; but his mind was preoccupied with the idea of it, and he did not care to listen to me. The whole town was full of it. That is a charm in a little town; everybody is so sympathetically full of the same events. Even Miss Horsman stopped me to ask after John Brouncker with interest; but she threw cold water upon my intention of saving the arm.
‘As for the wife and family, we’ll take care of them. Think what a fine opportunity you have of showing off, Mr. Harrison!’

Some of the humor is a little broader than what I remember in Cranford, but there’s a definite sense of the same sensibility at work. (Just as one example, there’s a wonderful scene where Mrs. Rose has an important conversation with an elderly lady who mumbles.)