Writing was an interest that came unexpectedly into my life. I wonder what my sister Nancy would have made of the efforts of the 'nine-year-old' (the mental age beyond which she said I never developed) whose fist, according to her, was incapable of holding a pen. There would no doubt have been a torrent of scorn, but I think she would have liked some of the jokes sprinkled into my books.  I am often asked where my sisters' and my urge to write comes from.  cannot answer, unless it is from our grandfathers.

... One magazine commissioned an article of 1,000 words -- about what, I forget -- and I duly handed it in on time. The editor telephoned and after beating about the bush a bit, said, 'Could you add a few more words please?' I said I could, but that I had produced the required number. 'Yes, I know,' he said, with embarrassment, 'but they are all so short we have got a lot of space left.'

Although the three terrible ones I read, in a row, last summer -- all books I had been waiting for -- made me want to, I'm suddenly very glad that I didn't give up on memoirs.  I've read a little bit of Nancy Mitford (not enough) and a little bit about the sisters (now, not enough).  And I do have a thing for upper-crusty, aristocratic, country house, last-century England. 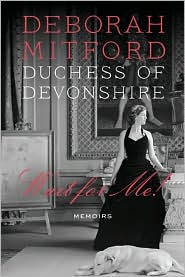 I enjoyed this book very much. It's a constant, lively string of short anecdotes about people, places, events, family and day-to-day life, good things and tragic ones, stretching from her birth ('How disgusting of the poor darling to go and be a girl') to her sisters' and brother's successes and losses, to becoming the Duchess of Devonshire and deciding to live at the ancestral pile.
In a way, there's a lot of name-dropping, but then again, they're names like Duncan Grant, Ian Fleming, Uncle Harold (the Prime Minister), Cecil Beaton, the Duke and Duchess of Windsor, George VI and Queen Mary, the Kennedys, other writers and painters, dozens of people I've never heard of, and even Adolf Hitler. Among many other things, she describes attending the inauguration (and funeral) of President Kennedy, and the coronation (after finding the necessary court dress in the attic and sending the Chatsworth state coach to London so they could arrive in style) of Queen Elizabeth. And personal stories, too, including her sisters Jessica and Diana seeing each other for the first and only time in almost 40 years. I'm sure that many of the stories were chosen because they were colorful, or telling, or just funny, and when she wants to make a political or cultural point, or complaint, she just does and moves on.

One of the charms of the book, for me, is that what the Duchess is writing about changes so quickly, sometimes after just a page or even a paragraph or two. There's one abrupt shift, about three-quarters of the way through, to a serious recounting of a serious family problem, and of regret over not knowing, at the time, what to do.  But then we're suddenly back to an odd evening out with a hostess who has a silver plate in her head because she was once kicked by her horse (or was it a cow?). There's something very appealing about such an 'unreal' life recounted in a very down-to-earth style, and with grace.

I have a relative who knows Her Grace very well, she always comes across as a race apart, in terms of her extraordinary family, experiences and magnificent attitude to life. She would make a brilliantly brisk agony aunt. I haven't read the book, but after reading your review I will do. Have you heard the BBC parody - Incredible Women, the one of Eleanor Fane-Gore is really funny - a mix of Enid Blyton and Nancy Mitford.

How lovely to read your review as I'm reading Hons and Rebels - Jessica's book. I'm really looking forward to reading Wait for Me.

You might enjoy "The Mitfords, Letters Between Six Sisters." Though the letters have been edited, by Diana Mosley's daughter-in-law Charlotte, still each sister's individual voice comes through so clearly. The letters also give a lot of history and detail about the family. I was glad to have read them before "Wait for Me," since they provided context and filled in some of the gaps.