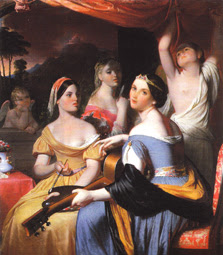 I'm growing more interested in reading history now, or at least social/cultural history and history that intersects with biography. I've read a few books (and one Edith Wharton novel) about the 'dollar princesses' (such as Jennie Jerome and Consuelo Vanderbilt) who married aristocratic British husbands in the late 19th century), and I was glad to come across this book, about American sisters who did the same thing a few generations earlier.

The four Caton sisters - Marianne, Emily, Bess and Louisa - were born in the 1780s and 1790s into a wealthy, Catholic, land-owning, slave-owning Maryland family. Their grandfather, the 'Directing Planet' who guided, educated and advised them, was the last surviving signer of the Declaration of Independence.

The book started a little slowly and stiffly for me, but as it continued, the writing seemed to flow better (or maybe the story just became more and more engaging). Suffering from asthma and other serious health problems, and needing to escape from Maryland’s dangerous heat and dampness, Marianne travels with her first husband to England and France in 1816, taking two of her sisters with them. The beautiful Caton sisters {especially Marianne, with her ‘large and wondrous eyes of deep hazel, with hair that corresponded, every feature regular, and a mouth, the sweetness of whose expression was unequalled, with teeth faultless in form and in colour and, with her head set on her sloping shoulders, as head was never set before’} were taken up into society, reluctantly in England and more easily in Paris, and when they meet the Duke of Wellington, who has just defeated Napoleon at Waterloo, he befriends and travels with them, stands in for Louisa’s father when she marries his aide-de-camp, and falls in love himself with Marianne.

Although Marianne then claimed that the Duke ‘never had any particular admiration for me; at least he never thought of me but with the same respect’ as her uncle did, this was not an opinion with which either the Duke of his friends could honestly concur. Neither Marianne nor the Duke left behind their long intimate correspondence; bundles of empty envelopes and references to letters received and sent are all that testify to its existence, with the exception of several private letters that provide a glimpse of their feelings. It is not a fabrication to claim that the Duke was, indeed, totally in love with Marianne, and that, while observing the proprieties, she was becoming attached to him.
They were both married, but, whereas, Marianne was patient and gentle with her ‘boorish’ husband, according to Lady Holland, Wellington was impatient and uncivil to his foolish wife, according to Mrs. Arbuthnot. Arthur Wellington was unhappily married and, in general, lived apart from his duchess. As penniless Captain Arthur Wesley (the family name reverted to Wellesley in 1797), he had proposed to Catherine Pakenham, the pretty and popular daughter of Lord Longford, and been rejected by her family; as General Sir Arthur Wellesley, he had returned to marry Lady Catherine (Kitty) Pakenham unseen for twelve years. When he did see her in the Dublin church, he could only whisper in shock to his brother Gerald Wellesley: ‘She had grown ugly, by Jove!’

Shades of Persuasion! Marianne was reacting in part to gossip-mongering by Betsy Bonaparte (her Maryland friend and sister-in-law, she of the unsuitable dresses):

While Betsy was being feted in Paris, she remained in contact with Marianne, but once the sisters were in London, and everyone, even her brother Edward, was telling her about their amazing reception and the Duke’s love for Marianne, her dormant jealousy and dislike were revived. Anxieties about money, the lack of a husband of rank, and her own powerlessness to change the conditions of her life were, no doubt, compelling factors. Her envy of those more fortunate, but in her opinion, less worthy than herself was vindictive. As someone said of her, ‘She charms by her eyes and slays with her tongue.’ …
The sisters’ reception in Paris and their kindness to her did nothing to lessen her ‘immoderate hatred.’ She poured invective about Marianne into the ears of her friends, writing to Lady Morgan, the novelist, about Marianne: ‘You would be surprised, if you knew how great a fool she is, at the power she exercises over the Duke.’ Betsy next threw in the fib that Marianne ‘had, however, no success in France, where not speaking the language of the country was a considerable advantage to her, since it prevented her nonsense from being heard.’ Then, she instructed Sydney Morgan: ‘Do not tell what I have written to you of this affair, since I should pass for malicious and unfriendly towards my compatriot and relation.’

Can you blame me for looking forward to more glimpses of Betsy?

Marianne, Bess and Louisa eventually marry (and use their personal fortunes to support) aristocratic husbands (not always being welcomed into their new families), while Emily has a long and loving marriage with John McTavish, a Scots-born partner in a renowned Canadian fur-trading company. When her first husband dies, Marianne marries the Duke of Wellington’s older brother, who becomes the Lord Lieutenant (almost the monarch) of Ireland, before he falls from political grace; later, Marianne becomes a lady-in-waiting to the then-reigning Queen Adelaide and visits Queen Victoria at Buckingham Palace.

Later in their lives, the sisters, especially Bess, joined other women in what Wake describes as a ‘network’ of financial speculators.

The social whirl gave Bess and her sisters wonderful opportunities to promote their financial interests. As they paid calls and visited, as they dined and attended routs, as they circulated in company and danced in ballrooms, behind their nodding heads and animated faces, gossiping chatter and decorative fans, ran the thread of a more purposeful conversation. Leading hostesses gathered Cabinet ministers, influential politicians, foreign ambassadors, royalties, financiers, landowners — and their ladies. And what was on offer, besides romantic possibilities and proposals, was access through important people to the latest political news and information. It is no wonder that Lady Holland moaned on March 4, 1834, ‘I have not been well enough to go even once to Psse Lieven’s Wednesdays, Ly Grey’s Thursdays, Dsse Dino’s Fridays or Mrs. Baring’s Saturdays.’ 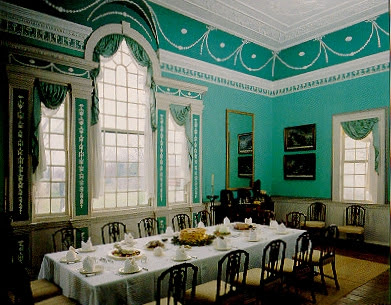 I am always learning how little I know (or remember) about early American history and culture. Reading this book reminded me of seeing the Kelly-green (bright, bright green) dining room at Mount Vernon. I know that they were in an unusual position for their time, but these women were intelligent, financially astute, political, strategic, independent (or worked, where they could, around the laws that limited their independence), adventurous and romantic – not quiet, genteel, pale and decorative, like the colors we might have expected to see on those walls.