I started reading {and have just finished} Suzanne Marrs' biography of Eudora Welty, in part because I wanted to have some context for reading this new book when the opportunity came. I was far enough along in the biography to have learned that William Maxwell (who was a respected novelist in his own right) was Eudora Welty's editor at The New Yorker, that Eudora and Bill became acquainted, first by letter, when they were both in their early 30s, and that they crafted a friendship that lasted for 50 years, one that extended to Bill's wife Emmy and their daughters, Kate and Brookie. {My parents have those; I hope that, and wonder if, I will?}

I guess that on some level, we have to remember that these are letters written by brilliant writers, who must have enjoyed wordplay, and a wonderful turn of phrase, and who must have consciously or unconsciously edited what they said and what they chose to reveal as they wrote. But, if we want to, we can also just be a little smitten (okay, very enchanted, and moved) by their concern and support for each other, and their shared interests, and their deep friendship, all shared in letters about books and writing, thank-you notes, invitations, gardening advice, get-well-soon wishes, letters confirming travel plans and visits, condolences, telegrams and postcards.  I'm already starting to miss the two of them.

I had finished reading (while the lawn mower stood idle) on the lawn the first section of The Golden Apples, and was three pages along in June Recital, when Emmy came out on the porch to get away from the cereal worms she had been pursuing through the kitchen cupboard, and I went back and read her the three pages and she smiled and said 'It couldn't be nicer." She is dreadfully critical and so I was as pleased for you as I would be for myself that she was pleased. ... She went back into the house and I went on reading, stopping once to take the folding chair out into the yard, lay a fire, and get the stepladder and take some things to the attic, at her polite request, and then, having done all these things without my mind, rushed back to your book. At one point I was aware that I was holding my breath, a thing I don't ever remember doing before, while reading, and what I was holding my breath for is lest I might disturb something in nature, a leaf that was about to move, a bird, a wasp, a blade of grass caught between other blades of grass and about to set itself free...

We are driving up to the Cape for the weekend, and I will pick up the book there, when what I have just taken from it has sifted down through my mind, and made it ready for more. But I wanted to write you now, because when a book first comes out, it is really like a party, and when I am invited to a party I like to come early. A childish fear, perhaps, that, if I were to come later, the hostess, distracted, might not notice I have come.

We both send love, Bill 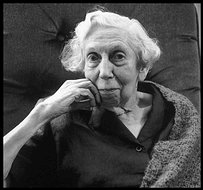 Eudora Welty to William Maxwell {May 1959}

...While things were at their most dismal, as they were for a bit, I had a wonderful dream that I opened the closet door under the stairs, where we keep miscellaneous, like the card tables, vacuum cleaner, double sockets and gift aprons, I don’t really know what all is back in there — and there were you and Emmy, saying, ‘We’ll just be in here, in case you want us. Don’t worry about us! We both brought thermos bottles, and we have an electric toaster.’ (The double socket came in handy I see). ‘Just open this door and we’ll be right here.’ I’m afraid Kate and Brookie weren’t in the dream. Anyway, while I was dreaming that, who knows but what you were in the hospital room and it may be been something a good deal like that closet, and I ought to have been on tap with my thermos bottle. Let us straighten this out who needs who most. How is your work, do you remember it? (I’m always pleased to be reminded, aren’t you?) I hope it is going along well. …

Love to you,
Eudora

I hope you’ve all been taking care and are well again — especially I hope you stayed home from the office and didn’t get any more calls from those who were passing through and longed for some conversation from you, like me — since I had my lovely conversation — and it was so sweet you, as always talking as though you had all day, and time for the news I most wanted to hear, when probably your taxi was just going by. Love to all of you. Don’t take a chance on the health. Maybe this weekend you’re all in the country, and looking around and appraising the pumpkins.

My week of riding mostly was good, and I found a copy of Elizabeth’s book in Scribner’s and had the whole ride home for it. Isn’t it a marvel — like a present to those who love her of everything that’s most deeply a part of her temperament and mind and eyesight. …

Give my love to Emmy and Kate and Brookie and I’m so glad of the wonderful summer had by every single one, and now I hope everything goes fine for the fall. Much love, and I will write soon. A cool cloudy shadowless morning, but no rain — the sprinklers have to keep it up all day, just to keep the camellias placated — they all have big buds now. 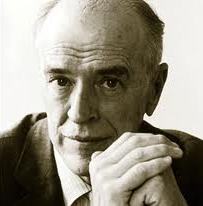 If I were to say what I was prompted to say when I read your letter, you would think, quite reasonably that I hadn’t understood a word of it. I do understand. Who hasn’t, at our age, at some time turned his face to the wall. We both worry about you — about the never quite going away tiredness. And about the way you are plucked at by people all over the country wanting something. Wanting you. Wanting you to do something for them. They don’t mean to be heartless, and, of course, don’t know or can’t imagine about the others, but the effect is the same as if they were. …There is also the matter of living alone. If you live with somebody you are saved (often by petty irritation) from having to confront despair. But anyway, you did it, and got through it, and got home safely. Which is the main thing. …

What I was going to say, and felt it made no sense to say, at the beginning of this letter, is that there is this room with the four-poster bed, very comfortable, Kate’s room no longer occupied by her, and it would have made us so happy if you had rung the bell and said I am at the end of my rope, will you take care of me till I get over it? We would have put you to bed in that bed, and driven that despair right out of the apartment. Remember that this is possible, won’t you? …

So, as I say, just remember. Bill 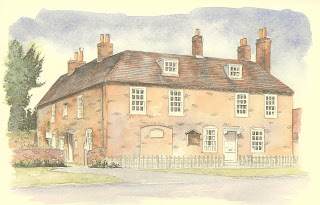 It was so lovely to get your call — hearing your voices and knowing all was well you — eyes, exhibition, plans. It wasn’t good timing for me to set my date with Delta Air Lines to fly the ocean … that I couldn’t get to NY for the coming home with you for the putting up of feet and the quenching of thirst… But can we hope to have our meeting later on? …

P.S. I found this picture of Jane’s house — It looks big, but is really small. The opposite of her novels. Small, perfect rooms, closely connected — Letter soon.


Much, much love, Eudora

{What There Is to Say We Have Said: The Correspondence of Eudora Welty and William Maxwell, edited by Suzanne Marrs, will be published by Houghton Mifflin Harcourt in May. I read a preview copy kindly provided by the publisher.}

Oh, what writing! I have this in my amazon shopping cart and can't wait.

Thank you for this. One of my most delightful reading experience in the last few years was "The Element of Lavishness," the letters of William Maxwell and Sylvia Townsend Warner.
I highly recommend it.

They are kind of intimate letters aren't they? I always wonder if literary correspondence is written with one eye on posterity. Beautiful though.

A lovely post and thanks for letting me know about this book...