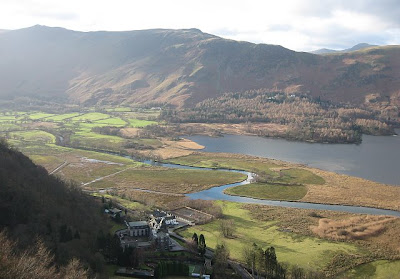 After hearing about his Lake District mysteries on other blogs {always happy to find a new mystery series to follow} and benefitting from a peek at a publisher's galley {full of typos! my professional editing pencil was twitching!}, I read and enjoyed Martin Edwards' The Hanging Wood, the fifth book in the series. Set in Cumbria (a place of lakes, and tarns, and fells, and Waters), the books focus on DCI Hannah Scarlett, working in the 'backwater' of the Cumbria Constabulary's cold case team, and Daniel Kind, a historian. These two seem to have a complicated history, individually and together. A series mystery writer has to work in enough of the backstory so someone arriving late (like me) can know what's gone on before.  Daniel is troubled by the death by suicide of a woman friend/lover and his failed relationship with another woman, and Hannah worked for and was mentored by Daniel's father.

The mystery begins with a horrific suicide; the victim is a troubled young woman obsessed with the disappearance of her brother more than 20 years ago. Daniel recommends that she talk to Hannah, and Hannah, feeling guilty that the call did not go well, pushes herself to investigate the cold case. The complicated plot involves a farm family, the wealthy owners of a stately home turned upscale holiday caravan park, and the staff at a library where Daniel is researching his next book {more on that in a minute}.

On the ground floor, she swept past the catalogues and the desk where the Librarian sat, through folded-back double doors into the rear of the building. Daniel had bumped into Orla here, the last time he’d seen here, and they’d agree to grab a bite together. She should have been working, but he sensed she’d lost interest in her job and preferred to browse through collections of old papers. Here the De Quincey correspondence was stored, along with Sir Milo Hopes’ extensive archives; thousands more volumes were packed into towering book presses.
‘I told Micah to put more warning signs on the presses,’ she murmured. ‘If you were crushed between them, you’d end up as flat as a dust jacket.’
Done to death by books? There were worse ways to go, even if you weren’t a bibliophile. Like suffocating in a mountain of grain.

This is a book driven more by plot by characters or setting, and though I think I was honestly hoping for the opposite, the characters and setting seemed a little pale and uninteresting to me, not as deeply drawn as in some other series. It might be because this book shows the less romantic side of the Lake District, in a run-down, hardscrabble farm and a glitzy resort.  But I was drawn in enough that I'll look for the earlier books in the series (the library has them), and the unevoked setting is redeemed, 100%, by Edwards' invention of St Herbert's Residential Library.

Each time he came here, Daniel found himself not wanting to pack up as darkness fell and set off home to Brackdale. St Herbert's possessed a unique charm, a residential library where you could read by day, sleep by night, and then wake to stroll through gardens boasting some of the finest views in Britain. He'd stayed over a couple of times, sharing Laphroaig and conversation with the Principal in front of a log fire in the drawing room before resuming work until the small hours.

Can you just imagine such a place? I fell asleep last night doing that... 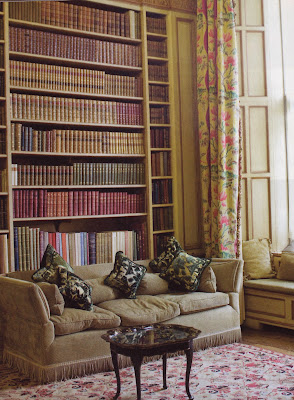 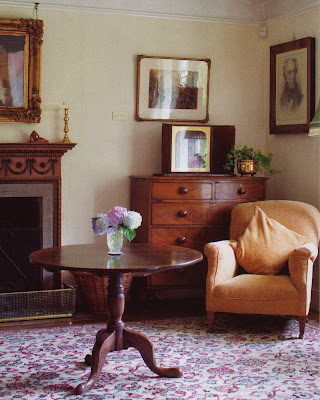 I read The Hanging Wood in a galley kindly provided by the publisher, The Poisoned Pen Press.

There is actually such a library in Wales and I am seriously counting the pennies so that I can take myself off to luxuriate in its wonders for a long weekend. I actually thought this was one of the weaker books in the series, precisely because it was more driven by plot than by development of the main characters. I think you will probably enjoy the earlier books more.

I have been looking at this one as it is on my library's new books list, but have been unsure whether to request it. I like the setting, but maybe it would be better to start with an earlier book in the series?

Hi, Danielle:
from what Annie said (she's a great source of reading wisdom!) it sounds like it might be. I enjoyed this book, but we might get to know the characters better by starting earlier in the series. I'm going to go back and see!
Thank you both for stopping by.
Audrey

I've enjoyed all the books in this series & can't wait to get my hands on this one! I think it would be a good idea to start with the first book, with some series I think it's necessary & this may be one of those series.

Well, a residential library sounds like a dream! There's a hotel in NYC called the Library Hotel and every room comes with books and a different theme. It sounds heavenly but it's terribly pricy, about $300 a night. Here's a link: http://www.libraryhotel.com/