A Stranger in Mayfair

I read mysteries quickly and for entertainment, and most often because I'm caught up in the ongoing lives of the recurring characters. (I sometimes wish there were more books like that, nonmysteries -- Angela Thirkell's and Anthony Trollope's are the only ones that I can think, though there must be others.)

I just finished reading this fourth book in the series by Charles Finch (the earlier ones were A Beautiful Blue Death, The September Society and The Fleet Street Murders), and though it worked for me on the first point (a couple of hours of quiet, enjoyable, unchallenging reading to start the weekend), this series isn't as successful on the second. In the hands of a different writer, Charles Lenox and his longtime friend and neighbor, Lady Jane Grey, might be more interesting characters, but they've always seemed a little wooden.  Charles isn't all a lost cause -- he's unconventional enough (barely), passionate about the causes he's uncovering as a new member of Parliament, even if he's disillusioned about the political process, and he's re-reading Cranford.  And there are enough historical details (Charles seeing Queen Victoria in person for the first time, Benjamin Disraeli attending one of Lady Jane's famous Tuesdays) to remind me why I've grown to like the combination of mystery and historical fiction. 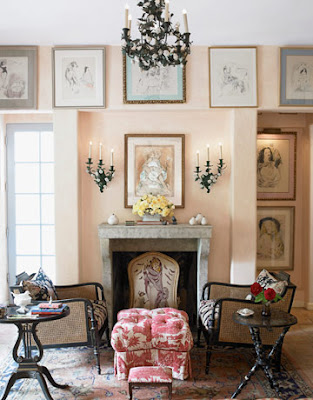 Domestic details, too (which I'm in the mood for lately). In this book, Charles and Jane have just returned from their honeymoon, and while they were away renovations were completed on their adjoining houses.

It was fortunate that the man who had designed and built the ten houses along Hampden Lane in 1788 had built them to the same scale, albeit in different configurations. Lenox's and Lady Jane's houses both had twelve-foot-deep basements where the staff could work and live, eight-step front stairs that led to broad front doors (his was red,, hers white), four floors of rooms, and a narrow back garden. It meant they fit together.
Still, to join them had taken a great deal of ingenuity on the part of a young builder named, aptly enough, Stackhouse. On the first floor he had knocked down the wall between their two dining rooms, creating a single long hall, which could now entertain fifty people or so. More importantly, it had left intact the two most important rooms in the house:  Lady Jane's sitting room, a rose colored square where she entertained her friends and took her tea, and Lenox's study, a long, lived-in chamber full of overstuffed armchairs, with books lining every surface and a desk piled under hundreds of papers and trinkets. Its high windows looked over the street, and on the opposite end its fireplace was where Lenox sat with his friends.
Upstairs there was a large new bedroom for them, and on the third floor two small parlors became a very nice billiard room for Lenox. In the basement the builders only made a slim hallway between the houses, firstly so as not to tamper with the foundation and secondly because the couple didn't need as much space down there. They were reducing their staff. They only required one coachman now, two footmen, one cook (Lenox's, Ellie, was foul-mouthed but talented), and one bootboy...
All of this left one enormous problem:  the butlers.

After all this, I was hoping the butler(s) did it.

I have my next mystery cued up in my Nook, and I've also been inspired to read or re-read some Lord Peter Wimseys.  But for now, back to South Riding, William, and then Persephones (!).

Thanks for a great review. I've not come across these before (although the Fleet Street one rings a bell). I know exactly what you mean about getting caught up in character's lives... it's quite comforting to revisit characters and surroundings in books and to follow new developments - with a mystery thrown in!
Re-reading Cranford... love that!
Thanks for linking to the Wimsey challenge :-) I'm itching to get back to Lord Peter's world right now but I have Pickwick and Persephones to get through first!

You make this sound lovely, and I really must track down a copy of the first in the series. t's been on my wishlist for ages, but I have yet to see a copy in a library or a shop.

Mysteries are a great escape, and this one sounds like fun! :)