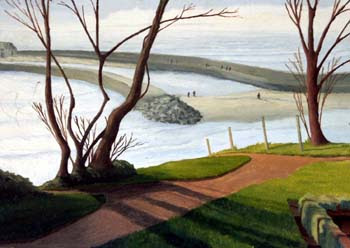 As it was with Emma, it's been difficult to read Persuasion (the last time I'll read Jane Austen for the first time!) without thinking about the film adaptations and how characters and events are portrayed there.  I wonder how I would have experienced this book without knowing the story, and what the screenwriters chose to pull out. Oh, well...nothing to be done about it.

The first volume takes us from the beginning of the story, when the profligate Elliots are persuaded by their friends to retrench by letting their home at Kellynch, and continues through Louisa Musgrove's fall on the Cobb at Lyme.  Two things came out in the story that I hadn't picked up on from the films:  first, that the estrangement between Sir Walter Elliot's family and his heir was fueled, in part, by Elizabeth's unsuccessful pursuit of Mr. Elliot, and second, that Anne had turned down Charles Musgrove's offer of marriage before he married her sister.  Except for her saying that no one will want Anne in Bath, Elizabeth is a more muted character in the book, and I miss her horribleness.

Mary, very much gratified by this attention, was delighted to receive him; while a thousand feelings rushed on Anne, of which this was the most consoling, that it would soon be over. And it was soon over. In two minutes after Charles' preparation, the others appeared; they were in the drawing-room. Her eye half met Captain Wentworth's; a bow, a curtsey passed; she heard his voice  -- he talked to Mary, said all that was right; said something to the Miss Musgroves, enough to mark an easy footing; the room seemed full -- full of persons and voices -- but a few minutes ended it. Charles shewed himself at the window; all was ready; their visitor had bowed and was gone; the Miss Musgroves were gone, too, suddenly resolving to walk to the end of the village with the sportsmen; the room was cleared, and Anne might finish her breakfast as she could.

Anne Elliot is such an old soul. Still, she has humor, and wit, and compassion, and empathy, and it's hard not to be moved by her regret and her efforts to accept what life has given her  It struck me how honest and psychologically 'real' Jane Austen's portrayal of Anne is.  She is rueful and calm when she advises Captain Benwick, but just hearing Wentworth's name affects her; she anticipates, with dread or studied calm, all of her encounters with him,  she considers his face and his tone of voice, she finds and holds onto evidence of his regard, if not his love, and she gains, and then loses, her footing as she spends time with him.

In the same vein, I loved the scene on the Cobb, before Louisa's fall, when Anne passes Mr. Elliot for the first time:

When they came to the steps, leading upwards from the bench, a gentleman at the same moment preparing to come down, politely drew back, and stopped to give them way.  They ascended and passed him; and as they passed, Anne's face caught his eye, and he looked at her with a degree of earnest admiration, which she could not be insensible of.  She was looking remarkably well; her very regular, very pretty features, having the bloom and freshness of youth restored by the fine wind which had been blowing on her complexion, and by the animation of eye which it had also produced. It was evident that the gentleman (completely a gentleman in manner) admired her exceedingly; Captain Wentworth looked round at her instantly in a way which shewed his noticing of it. He gave her a momentary glance, -- a glance of brightness, which seemed to say, 'That man is struck with you, -- and even I, at this moment, see something like Anne Elliot again.'

Which of us hasn't been surprised to find ourselves pretty -- and which of us wouldn't want to see if the object of our affection had noticed?

I love Persuasion so much. Anne is such a beautiful character who blossoms throughout the book. No adaptation has quite captured her as I imagine her to be, but I did enjoy Sally Hawkins' portrayal in the recent BBC version.

I've been wondering for a while whether to re read Jane Austen in 2011 and your post is confirming my thoughts even more.

I feel lucky that I read all of the books before seeing any adaptations, although on my rereads nowadays the adaptations sometimes sneak into my head!

Persuasion is one of my very, very favourites, and this post brought back all of that delight. I reread it earlier this year, but I almost want to reread it again!

Ah, Persuasion. Why oh why, have I not read this one yet? I need to get on this quickly.

Persuasion is Austen at her peak, I think. I love the story and the way she writes just a bit different from her other works. Sense and Sensibility is my other favorite followed by Northanger Abbey.

Persuasion is a great book and it is hard not to fall in love with Anne. She is such a clever girl - both intelectually and emotionally.