Since I’ve had a long list of books on reserve, and many specific suggestions to follow up, I’ve noticed that it’s been a long time since I just browsed the bookshelves at the library looking for something good to read. A few weeks ago, though, I did walk past the shelf of paperback mysteries and pull out this one, by a writer I (and probably you?) have never heard of. 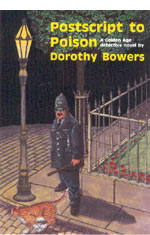 Postcript to Poison is one of the ‘forgotten’ Golden Age mysteries being republished by The Rue Morgue Press.  I’ve read a few Rue Morgue editions that the library happens to have, including two of the Lady Lupin mysteries by Joan Coggin (ditzy daughter of an earl marries vicar and moves to country town) and some of the Detective Inspector Sloan mysteries by Catherine Aird. The publishers’ introduction suggests that Dorothy Bowers was a writer in the footsteps of Dorothy L. Sayers, who would have been more well known had she not died young from tuberculosis after writing only five books; and others agree.

I thought the opening chapters, with a handsome doctor treating a malicious old lady and coming downstairs to talk with her granddaughters, were a little choppy and hard to follow. It's funny...if this were a contemporary mystery I probably would have put it down after the first couple of pages, but since I like vintage mysteries I was more willing to see where it might go.When Mrs. Lackland is poisoned the night before she plans to change her will, there are the other usual suspects:  the butler, who has just been given the sack, the spinster companion, and one granddaughter’s actor boyfriend. The investigation is launched by the obligatory solid, dependable local policeman:

Superintendent Littlejohn and the City of Minsterbridge would, had inquiry been made of each, confessed to mutual satisfaction. The superintendent enjoyed the highly respectable, slightly pedantic, orderly flavor of the place, where even the small snobberies and fuss over trifles seemed nothing worse than the rather superfluous trimmings you more or less expected to find in a cathedral city without industrial life of any kind. For its own part Minsterbridge readily admitted its appreciation of the superintendent’s tact and habitual effacement of himself and his men. It was as if he said, you must have a police force, I am afraid, but I will keep the fact quiet as far as possible.

Littlejohn and his sidekick, Sergeant Vale, are later joined by Bowers’ series detective, wry, good-humored but quietly determined Chief Inspector Dan Pardoe of Scotland Yard and his partner, Sergeant Salt. They all investigate amiably together, looking both for the murderer and a ‘poison pen’ who has sent anonymous letters accusing the doctor.

You're rolling along, enjoying some good turns of phrase, until you’re stopped by a sentence or two like this one:

More than this, Murder, his work achieved, drove back with the blue light flickering in ceaseless play round the radiator of his car, the solid sweep of the rain trying, it seemed, to build a wall between him and his security; while wind and weather obliterating his retreat raged unheeded round the body of his victim.

My goodness; it’s almost as though you can tell that this is a book by a first-time writer. Even with uneven writing, the plot is well put-together; Dorothy Bowers was (later) inducted into the Detection Club, whose members believed in the style of writing in which all of the clues and all of the information the detectives have to work with are given to the reader. That still didn’t help me figure out who the murderer was, but when the murderer has been caught, and the detectives are doing their own post mortem, there are five or ten pages that carefully set out what we should have seen all along.

I might look for more of the books in this series the next time I’m browsing. In the meantime, I have two other mysteries to read or finish reading – both from contemporary series that I’m happy to have discovered — and a Georgette Heyer mystery set at Christmas that I set aside to read now when I found it last August. Then I’ll turn to more serious reading again, when I have long winter afternoons to spend that way (I have even more good books stacked up and waiting).

A great time of year for mysteries even the slightly uneven ones like this. Why is it so much easier to forgive the flaws of a mystery than a book pegged literary fiction? Do we assume less of the mystery? I see the Nicola Upson in your sidebar. I am also a fan!

Good gracious -- that one passage you selected that comes out of the blue just winds its way all over the place and avoids common sense altogether! My brain hurts from reading that one!

I haven't read a good vintage mystery in a while, though. Perhaps I'll check one of these out and give it a go at some point when I'm looking for a nice mystery read on a cold night!