The happiness of such misery, or the misery of such happiness: Persuasion, Volume Two 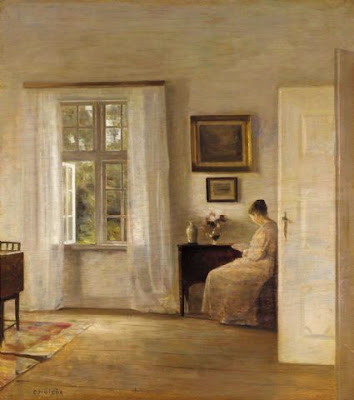 {This is another painting by the Danish painter Carl Wilhelm Holsoe (title unknown) that I found online.  They are so peaceful and lovely and bittersweet, and although it's from a different time and place, this could be Anne Elliot, don't you think?}

Now that I'm done, I'm so glad that I read and re-read Jane Austen's six novels in the order that they were written, and that Persuasion came last, and was read last. I finished reading it this morning, and I'm also glad that I saved it for several quiet autumn (late autumn, as it turned out) afternoons.  It's even hard for me to think of interesting things to say about it, because it just left me very content and full of admiration (again) for its author.  Maybe it's because I'm of an age when you begin to know that things that might have happened may never happen, and you hope that you will be a little bit like Anne Elliot as that unfolds.  And that some of the events and people around you will be funny, and that the things you hoped would be true will sometimes still be.

Like Mr. Knightley, Captain Wentworth was never my ideal romantic hero, but he grew on me at the end of the book, when he is a little more wry and self-deprecating about what he has almost lost.  And there were other things in the book that surprised me after knowing the story from the films.  Mrs. Smith, Anne's widowed friend in Westgate-Buildings, has a more significant role in the novel. She's not just a pleasant gossip, but an intriguing figure who has a history with Mr. Elliot and a reason of her own to push Anne towards him.

And the whole Mr. Elliot/Mrs. Clay thing has been turned on its head again.  When I watched the first film adaptation (the Amanda Root/Ciaran Hinds one), this part of the plot escaped me; I just missed the significance.  It came to me (that Mr. Elliot was courting Mrs. Clay to draw her away from Sir Walter) when I saw the more recent BBC/Masterpiece production, but in the book, whether there's a false courtship or a threat seems more ambiguous (and at the very end, who might be threatening whom is part of Jane Austen's humor).

Mrs. Clay's affections had overpowered her interest, and she had sacrificed, for the young man's sake. the possibility of scheming longer for Sir Walter. She has abilities, however, as well as affections; and it is now a doubtful point whether his cunning, or hers, may finally carry the day; whether, after preventing her from being the wife of Sir Walter, he may not be wheedled and caressed at last into making her the wife of Sir William.

When I started my Jane Austen project I collected the six novels in the Everyman's Library editions, so my copy of Persuasion has (as an appendix) the "cancelled" chapter that changes the way the ending is written (if not what happens).  Part of it was used in the films (the scene where Captain Wentworth is asked to tell Anne that the Crofts will cancel their lease at Kellynch if the rumors about an engagement between Anne and Mr. Elliot are true), and then things just sort of go on wimpily from there. It was so right of Jane Austen to rewrite the ending, so that Captain Wentworth could write his 'You pierce my soul' letter.  I would have hated to miss out on that.

And though I almost wish there had been more of deliciously horrid Elizabeth Elliot in the book, I love the way Jane Austen puts her to rest at the end:   'She had soon the mortification of seeing Mr. Elliot withdraw; and no one of proper condition has since presented himself to raise even the unfounded hopes which sunk with him.'


.  .  .  .  .  .  .  .  .  .
After I finished the book I went to the Museum of Fine Arts to see the new building, which just opened last month, and the reinstalled American art.  It was beautiful, and crowded, and a little overwhelming, so I used my favorite museum-going technique of taking a whirlwind tour and planning to come back (my ticket gives me a return visit! I didn't know that.)  I did spend a little more time in a special exhibit of exquisite samplers (like this one) from colonial Boston...and read that there will be more exhibits, on embroidery and textiles from this era, next year. One more thing to look forward to.

Very much enjoyed reading both parts of your review and studying the lovely illustrations. I have the edition with the cancelled chapter, too, and I agree with you that the actual end is perfect. Hard to believe Austen wrote and edited it all by hand! I'm planning a literary pilgrimage to Lyme Regis next year. I want to see the Cobb.

Yet again, another wonderful post -- I do adore the painting you've included and your insights into your challenge. I've yet to read Persuasion, but will look for the Everyman version.

That's a lovely picture, isn't it? So atmospheric...
Persuasion is the only one of JA's books that I've read only once. This will be remedied!
I linked over here from Rachel (Book Snob)'s blog and am about to add you to my blog roll. I see from the links down the sides that we read a lot of the same type of books! :)

Isn't it beautiful? The letter is my favourite passage of a book, ever. It makes me cry every time I read it. Persuasion really is Austen's Magnum Opus and I think people who stop at Pride and Prejudice are truly missing experiencing the depth of her talents.