I hope you had a wonderful Thanksgiving...we did. But this weekend was all about leftovers and pizza, and not wanting to go anywhere near a kitchen for a few days. Instead, I treated myself to a few hours of uninterrupted reading, and foodie reading at that: Christopher Kimball's new book, Fannie's Last Supper, an account of his attempt to recreate a twelve-course, relatively authentic, high-Victorian dinner party from a menu printed in the back of The Boston Cooking-School Cookbook, updated by Fannie Farmer in 1896. (I also watched the PBS documentary that accompanies the book; you can read more about the project here.) 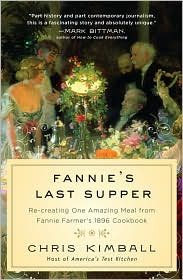 Kimball and his team of cooks used a wood-fired stove, a hand-cranked ice cream maker, and a lot of very authentic ingredients.  With some adaptations for a modern kitchen, he offers a recipe for each course: oysters, mock turtle soup, rissoles (deep fried squares of puff pastry with a chicken and mushroom filling), lobster, saddle of venison with lyonnaise potatoes, sugared beets and currant jelly sauce, wood-grilled salmon, fried baby artichokes, Canton frozen punch, roast goose with chestnut stuffing and applesauce, molded Victorian jellies, a French mandarin cake, and coffee, cheese and crackers.

Do you know how people say that they read cookbooks like novels? For the most part the recipes in this one are ones that I'd rather read than cook (The sauteed brain balls that went into the mock turtle soup weren't a big hit with the dinner-party guests, either, apparently.)

I love to read food writing and culinary history, and I enjoyed the sections that described how 19th-century Bostonians ate, cooked, shopped and behaved at the dinner table. {I'm hungry for more of that now.} As Kimball notes at the end of the book (which gets a little long-winded), the changes that took place in the kitchen happened the same way they do now...new technology replaces old methods, new scientific thinking replaces old ideas, and we exist, inevitably, in a blend of the old and the new.

One of the interesting points that Kimball makes is that Fannie Farmer was probably a better businesswoman and teacher than she was a cook. In a nutshell, he says that she was very good at the basics, even at things like adding egg whites and egg shells to boiled coffee to take the bitterness out, but that she tended to fail when she tried to tart up or add fanciness to a recipe (some of the food in her book, such as a tomato sauce thickened with flour and beef broth, was just horrible). 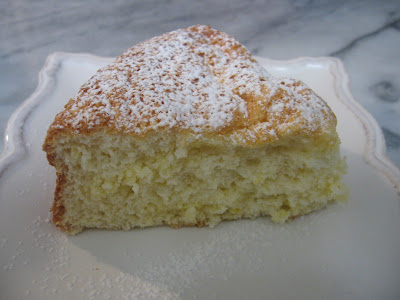 The book includes recipes for all twelve of the dinner-party courses, and a few extra ones. They're all recipes that I would rather read about than cook, but this one, tucked in before a much more complex French cream cake, seemed like it would be fun to try. Kimball says that it's 'an authentic sponge from the Boston Cooking School and gives you an idea of what one of its workhorse recipes was really like.'

Not  really, I guess, since the recipe was adapted to use modern mixing methods.  It would have been more authentic ( not to mention arm-tiring!) if the egg whites and then the eggs and sugar were beaten by hand, but it was fun to get a quick and relatively effortless look at a Victorian recipe.

This cake (to me, at least), fits into the first category.  It's simple, and gently-flavored (a little creamy, a little lemony).  The texture seems very light when you first put it in your mouth, then a little cottony (spongier?) as you chew it. It would be good split into two layers and filled with jam or lemon curd, but it was also, on its own, a nice, old-fashioned cake to nibble on while reading.


Victorian Sponge Cake
from Fannie's Last Supper, by Chris Kimball
{Some details were left out of the recipe as printed in the book; my fill-in notes are in brackets.}

{Preheat the oven to 375 degrees. Grease an 8-inch round cake pan, with sides at least 2 inches high, and lay a circle of parchment paper in the bottom of the pan.}

{Using an electric mixer with a whisk attachment}, beat the egg whites with the cream of tartar and 2 tablespoons of the sugar until it holds 2-inch peaks. The whites should still be moist and slightly soft. {This took about 5 minutes.} Remove to a separate bowl.  Using the same mixing bowl as for the whites, beat the yolks with the remaining sugar until light and ribbony, 4 to 5 minutes in an electric mixer. {I'm note sure what 'ribbony' means..mine were very pale, almost ivory in color, and smooth.} Add flour and mix on low speed for 10 seconds. Remove bowl from mixer.  Add whites, lemon rind, lemon juice and salt, and fold together by hand with a large rubber spatula.  {Pour the batter into the prepared cake pan and} bake for about 30 minutes. {After 30 minutes, my cake was risen, golden brown, and a little craggy on top; it had pulled away from the sides of the pan and seemed set when I touched it lightly in the center. It did still have some eggy bits in the very center when I sliced it.}

Brilliant post. Love that Victorian sponge. I love books that describe exactly what people are eating. Many of the meals in Gaskell's Wives and Daughters seem plain fare - bread, cheese, grapes, beef and glasses of wine, even for the children!

Sounds like an intriguing read -- I've always been a bit fascinated by these sorts of things during this time period. Looks like the cake was a win as well!

What an interesting sounding book! I especially like that it's about Boston, a city I don't know much about. :) And has an accompanying documentary: how fun.

You always direct to the best of foodie books! Love this type of thing even when the food is not something I would ordinarily (or ever) make. Reflections and insights into another age. But that cake looks beautiful and like something I would make. Great post!

Fascinating!! As soon as my library decides to bring in all the books I have on hold and clear up some space in my 'holds' queue I need to request this. It sounds right up my alley.